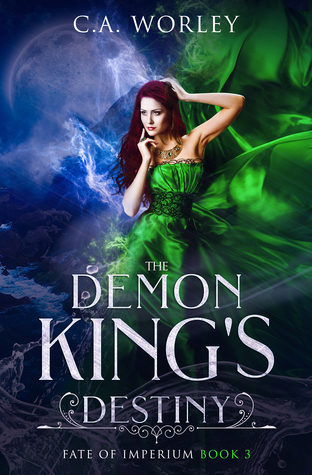 When Marrok, the Demon King of Sundari, meets his fated mate in the dreamworld, he ignores the pull of the saatus bond. He has no desire to make a life with the female, not with his past being what it is. Unable to deny the bond for long, Marrok accepts his demon spirit’s need for its mate. He plans to use their connection to prevent him from turning rogue, while keeping his heart safely buried in the past.

Since the age of six, Evelyn has been dreaming of the Demon King. When she starts having visions of his past, old betrayals are brought to light, including an ancient brotherhood who has been working against the pair for decades. Knowing Marrok may never love her in the way she loves him, Evelyn chooses to fight for their future anyway. She’ll protect everyone she loves from the insidious group—or die trying.

***The Demon King’s Destiny is the third book in the Fate of Imperium Series. Each book is the story of a different king and his fated mate. While the three books do not have to be read in order, it is highly recommended.

Evelyn felt the change before she opened her eyes. Her stance widened and her hands flexed with her magics.

No calm breeze brushed across the clearing. Tonight, a blistering wind struck her form, its howling whistle bounced irritatingly off her eardrums.

Instead of soft blues and purples, the moon was giving off shades of red and orange. Flames crackled and licked the trees of the forest, but nothing was burning. The dreamworld, or something in it, was irritated.

Slowly, she rotated, seeking information, waiting for the elements to speak. They buzzed, drawing her attention to one of the paths connecting the clearing to the woods.

The fire split into columns on either side of the trail and a form emerged from within the inferno. Tall, with broad shoulders and a lean trunk, the male stalked forward.

Blackened eyes locked on hers, so intense she felt them in her core. Long, predatory strides moved him directly in her path. Without thought, Evelyn opened the barrier and he stepped into the clearing.

The wind screamed and the only other sound she could hear was the boom of her thundering heart. He advanced swiftly, everything about his approach screamed he was a man possessed. His intent couldn’t be clearer.

In two second she was in his arms, his mouth slamming into hers. This first kiss—the first she’d ever experienced—was hard and unyielding. It was nothing like she had imagined, and almost more than she was prepared to receive. This wasn’t the kiss of a lover. It was a punishment.

Evelyn gasped and Marrok took advantage of her parted lips, driving his tongue into her mouth. Her fingers clenched the fabric on his shoulders as she trembled in his embrace, struggling to stay on her feet.

Her veins throbbed, her heated blood reaching a rapid boil. His arms tightened and she knew he’d never let her fall.

Evelyn felt him everywhere. His powers slid up and down her skin, caressing, inciting. Their shared breaths depleted her of oxygen and tiny pinpoints of light burst from behind her eyelids.

The high-pitched winds built into a crescendo and the blazes roared. Higher and higher until the dreamworld exploded with a blinding radiance, bathing their bodies in the white of their magics before returning once more to muted colors and a calm breeze. The forest was once again covered in purple and blue moonbeams.

The world settled, along with Marrok’s spirit. He’d been on the verge of something terrible. He’d gotten worse every day without his saatus. Another two years without her was out of the question.

Feeling once more in control of himself, he slowed the kiss, bringing a hand up to palm the back of her head. His lips drifted to the corner of her mouth, then to her temple, before dropping to her ear.

“You’ll never again wait so long to summon me.” He failed to mention his own unsuccessful attempts to enter her world.

Evelyn, still reeling from his arduous assault, took a moment to process. He was upset she hadn’t pulled him into her dreams. She smiled against his chest, then tipped her head back.

“I don’t know you well enough to miss you. But I never imagined, little mate, once I’d confirmed for you that you were my saatus, you’d wait so long.”

Evelyn attempted to free herself from his arms. He didn’t budge and she glared up at him. “And I didn’t think, once you confirmed for me that I was your saatus, you’d do absolutely nothing to find me.”

He let go and she felt oddly bereft when he put space between them.

“So you didn’t call for me out of some sort of revenge?” he snapped, trying to let go of the last of his frustration.

“What? Of course not. And what makes you think I didn’t call for you?”

A muscle in his jaw ticked. He glared at his gorgeous mate, who had physically matured greatly in these last two years. Evelyn would be twenty-one by the next solstice, which meant she’d reached full physical maturity during their time apart.

Her cheekbones were more pronounced, giving off a regal countenance. Her small nose pointed to two full, pouty lips, still swollen from their shared passion.

Her breasts were larger, rounder, making her waist appear tiny. Maybe it was tiny. He was having trouble concentrating, caught between spanking her arse and kissing her senseless again.

“I think you didn’t call for me because I haven’t seen you in almost two and a half years, Evelyn.”

A thrill shot through her. Marrok really was upset about being away from her. He must have missed her greatly. “I’ll remind you I have no idea how you come to me in my dreams. Besides, I thought demons could break into the dreams of others, if they chose.”

His arms crossed, not liking the reminder. He, too, had tried everything he knew of to enter her dreamworld. For more than two years he’d desperately hunted her in his sleep, needing the touch of her skin to sooth his mind. With every attempt, he came up against a barrier he could not breach.

He’d come close to riding on Gwydion to retrieve her. When he’d last left, she’d been battered and bruised. He wanted to know of her health, to look upon her with his own eyes. The dreamworld was the only safe place to do so.

Several more attempts had been made by the rogues to breach the walls of the Terenuskit Fortress, the building he called home. Only the constant fighting kept him away from his mate. It reinforced the fact she would not be safe in Sundari.

Marrok was the strongest of his species. It was too risky for him to travel to the Westland and leave his people vulnerable. Or, worse, risk rogue demons following him. He was loath to bring her to the Southland. What was he to do? He felt like he was fighting on every front of his existence.

Evelyn licked her lips and he fixated on the reddened skin. He hadn’t intended to be so rough and he certainly hadn’t expected her to return with equal fervor. His trousers had grown uncomfortably tight, a direct result of her enthusiasm.

“If it means anything,” she said, “I did try reaching out to you. I’ve tried every night since. I was afraid you wouldn’t come for me so I tried to pull you here. I thought … I was afraid something had happened to you. They cut you.” Her voice whispered the last part sadly.

Marrok’s face softened. His mate had worried he’d been harmed. He reached for her and she didn’t resist his embrace.

Resting his chin atop her head, he told her, “I tried, as well. Dreamwalking is tricky business and, obviously, I was just as unsuccessful.”

“Why didn’t you come for me? To Gwydion?”

“My kingdom is not a safe place to be. I’m not inclined to endanger you.”

“Then don’t bring me to Sundari. You can still come to see me, to visit, maybe speak to my father?” she added hopefully.

Marrok exhaled. “Walk with me.”

He spoke with no emotion and Evelyn’s heart plummeted. He wasn’t going to come for her.