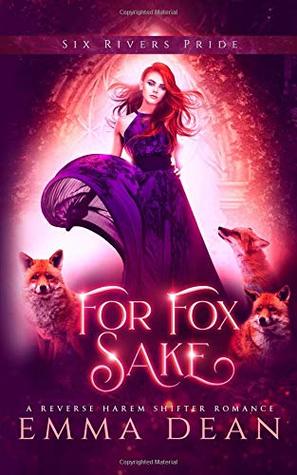 What do you do when you’re outfoxed?

Kenzie is the only non-witch in her family. When her younger sister’s powers end up stripped from her, Kenzie promises to find a way to get them back – after all she has a very specific set of skills after trying to make up for not having any powers of her own.

When Kenzie finds something to restore her sister’s powers, the only way to obtain it is to steal it from the Alpha of the West Coast Pride. Right as she’s about to succeed three sexy foxes snatch it right from under her nose. Will Kenzie be able to take it from them before they steal her heart as well?

The one at the center – he was tall, but not the tallest. His burgundy hair looked like a jewel among all the green. Hunter. He tilted his head as he studied her. She could tell he was trying to get her scent.

Then he pulled his hand out of his pocket and Kenzie clenched her hands into fists when she saw the potion.

“Would you take off your charm?” Hunter asked. “It’s…strange not to know your scent.”

Kenzie looked to the black-haired one, Ash. The memory of his arm around her waist made her cheeks heat and she hated herself for how badly she wanted him to do it again. Ash crossed his arms over his broad chest and his blue eyes sparkled when he gave her a mischievous grin, like he knew exactly what she was thinking.

But these foxes looked more like really fit human men than the larger predator shifters did in their human forms. They were still gorgeous, but not massive like Samuel was. She wondered for a brief moment if the foxes had that brutal strength shifters whispered about. Like the Fates had taken pity on their size and made them strong enough to take on a wolf – sometimes stronger.

Then Finnick ran his hand through his flame-red hair and walked forward. Kenzie knew she should keep her eyes on Hunter, but this one had been the first she’d seen. Something about his charm had an edge to it, but the way he grinned at her – it was infectious and she desperately wanted to know the joke.

“Did you know foxes can feed on chaos and pain?” Finnick asked. His voice was serious despite the expression on his face and it made Kenzie jump, like he’d scared her. “I can taste your pain.”

“What do you want from me?” she demanded, watching the way Finnick circled her.

“We want to know what you smell like first,” Hunter told her. “Maybe I’ll give you the potion for it.”

She narrowed her eyes at him. “What do you want with my scent?” She’d kept it a secret for years. No one knew her true scent. It was her only weapon against the shifters.

“To know you,” Ash told her, stepping forward to circle in the other direction.

Hunter smiled and tucked his hands back in his pockets. “Take off the charm, and I’ll tell you why we’re here. Maybe…maybe we can make a deal.”

Hope flared for a brief moment before she crushed it. These were foxes. Stereotypes were true for a reason. Most avoided foxes because they were impossible to trust. But…if he’d give her the potion? What was she willing to do for it – for Selene?

Slowly she reached up. Each earring was enchanted to help her exist in the paranormal world. Two were for scent, another to mask the sound of her heart and her breathing, and then the fourth was to enhance her senses like sight and smell. The last was to give her strength when she activated it – enough strength to take down a bear shifter if she needed to, but only for an hour.

Without powers she was more vulnerable than she would ever admit. Without her charms she was defenseless against any paranormal being. Her hands shook as she removed them all. No need to give away which charms did what.

Once they all twinkled in the palm of her hand she glared at Hunter and put them in her dress pocket, daring him to get closer so she could snatch the potion from his pocket.

Her auditory charm still in her ear helped her hear the sound of the underbrush being crushed by Ash’s foot as he came up behind her. His hand brushed down her arm and she shivered.

Kenzie knew they could hear the beating of her heart now, they could hear her breathing quicken as she felt Ash brush his nose against the back of her neck. She blushed, knowing they could smell how nervous she was – how much she liked the way he touched her.

Clenching and unclenching her hands she focused on her breathing – control. That’s what she’d learned among the humans. Perfect, unwavering control. She’d spent too many years relying on her charms. Kenzie needed to practice more.

Ash jerked back from her and growled. “Mate,” he hissed, baring his teeth.

Kenzie bared hers right back. “No,” she snapped. “I am not.”

Finnick’s eyebrows rose in surprise. “She’s your mate? How fun. Let me smell.”

Kenzie wanted them to get the fuck away from her, but she wanted the potion more. How close would Hunter get?

Ash got in her face, his blazing blue eyes searching hers. “Whether you like it or not, you’re mine.”

He grinned then, slow and full of fire. “Sure, but only if you mean it.”

A flicker of doubt ran through her.

And then Finnick’s hand on her bare shoulder had her whipping around to smack his hand away. “Mate,” he said, grinning like he’d won the lottery. “You can hit me if you want. I like it rough.”

Hunter strolled right up to her then, the toes of his boots brushing the tips of her Converse. He looked down at her, so close she had to crane her neck up to look into those strange, glittering brown eyes of his. When the sun hit them they glittered like liquid gold.

Despite her common sense she was entranced by him, by the strange musky scent he exuded with its hint of sharp citrus. “Foxes can mate in triads like the felines,” Hunter murmured, examining the line of her jaw like he thought it might hold the answer to whatever question he had. “It’s entirely possible, especially considering how close the three of us are.”

Then his hand shot out, so quick she barely even registered the motion until his large, calloused hand wrapped around her throat. Her heart pounded so hard it was difficult to breathe, but when she had a second to evaluate the situation she realized his touch was so gentle it was barely there.

His thumb brushed along the column of her throat and damn her, she shivered again, eyes closing as the touch filled her with a strange electricity.

Kenzie’s eyes shot open when Hunter bent to run his nose from the top of her shoulder all the way to her throat until he was just under her jaw. His lips against her bare ear felt…delicious.

“The taste of your pain is intoxicating, mate,” Hunter murmured against her skin. 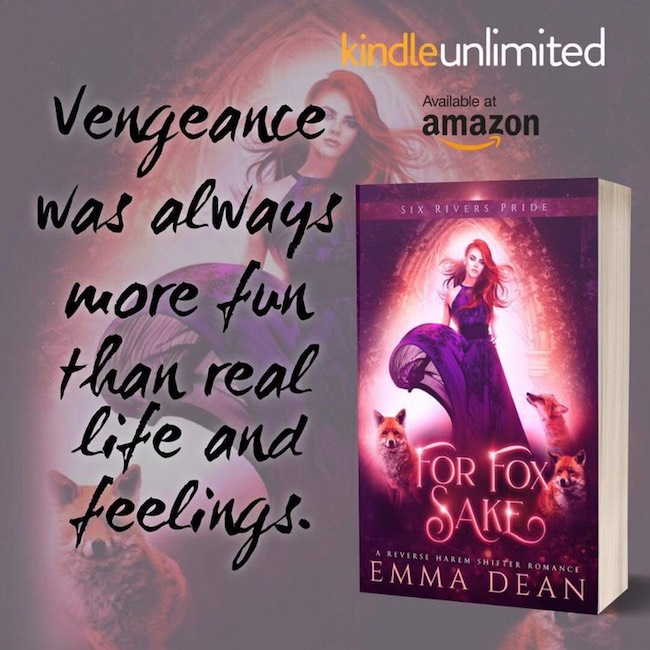 Emma Dean lives and works in California with her husband and son. She loves romance but needed something different so Draga Court was born. With too many stories to write the schedule has been filled through 2018.

When she’s not writing she’s reading, or spending time with her family.