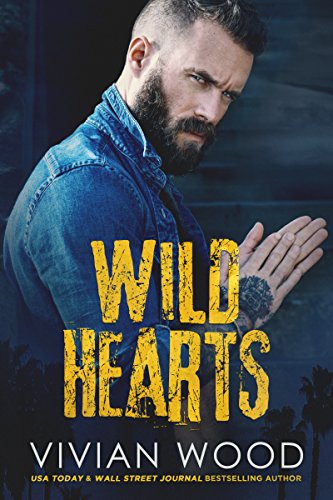 Vivian Wood explores some touchy subjects in her new book, Wild Hearts, having her MCs encounter drug smuggling, human trafficking, and illegal immigration.  It’s well-written, if a bit slow-moving at times.  However, that slowness seems to flow with the whole book, which takes place on an island off the coast of Georgia.  The pace really lets the reader get to know the characters.  And yet, as is pointed out by the characters themselves, you don’t know them.

One of my favorite parts of this book was Faith.  For once, we don’t get a simpering woman who reverts to her 16 year old self.  She has moments where I thought it would go that way, but mostly she is self-assured and certain in what she sees, thinks, understands, and feels.  I did hate that she seemed to change a bit and play games with Alex rather than just telling him what she wanted, as she did in the beginning, but for the most part, she actually continues to act like a successful 20-something lawyer.

There were a few spelling and capitalization errors scattered throughout, but nothing that interrupted the book or the flow of the story.

I’m actually not 100% sure how I feel about this book. You spend a lot of time following the characters around in their daily lives, you get invested in them, but thinking back…you don’t KNOW them.  It’s a strange mix of really in-depth details (Alex’s obsession with high-protein, low-carb foods) to non-details (what does Alex actually enjoy doing? What did he go to school to do?  What did he do before he moved back to the island?).  It’s not the characters themselves that draw you into this story.  It’s the mystery surrounding them.  To a certain extent, Alex, but mostly Faith.  It seems the only thing that keeps the story moving is her slowly uncovering events in her family history that led to her completely forgetting about an island owned by her Aunt on the Georgian coast.

I kept reading and I wanted to keep reading, but only because I wanted to know what nefarious things were going on on that island.  The story behind the story felt like the driving force in this novel.  The hints at illicit pasts and shroud of secrecy that seemed to surround the abandoned plantation house were so well-done.  I was gearing up for something truly shocking.  The wrap-up and final outcome was a slight let-down, because of this.  It was super easy and all ends got tied up. Also, there was a lack of closure with the romance side of the story, though it did not end, in any way, in a cliffhanger.

This book has left me feeling unsatisfied.  Not dissatisfied.  It had all the right elements.  It’s just like I ate a tasty meal and I’m full, but there was something lacking.  I’m craving a lava cake with sea salt on top and got a small fruit tart.  If you want a book that is technically excellent and even has likable characters with a decent plot, this is it.  But it’s not a book that grips you and doesn’t let you go.  There’s a distinct lack of je ne sais quoi.

Get your copy of Wild Hearts by clicking on the image below!

I received a copy of this book and volunteered to review it.