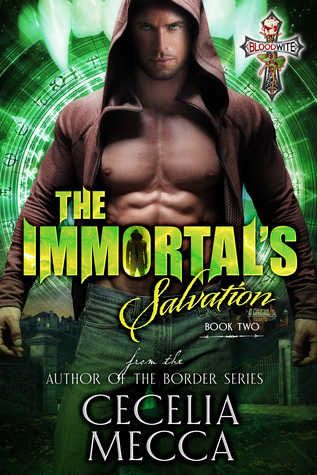 Even cursed blood can fall prey to love’s bite.

Lawrence Derrickson never wanted to be a chief, let alone a vampire, but fate has always been a fickle beast…callous to the inner-workings of a man’s heart.

Seven hundred years after he was turned, he’s still chief of Clan Karyn, although his clan now consists of only his three siblings. With no more castle to protect and defend, they are dedicated to only one cause—protecting the Cheld—their superhuman descendants.

Lawrence longs for a different life—a life of his own passions, desires, and dreams—but duty drives him further from that with each passing century of protecting the Cheld. Until their mission brings him to Stone Haven. In saving a fledgling Cheld, Alessandra Fiore, he meets her best friend, Toni O’Neill, a human woman who seems to understand him better than anyone has in over ten lifetimes. Too bad she’s already taken.

Lawrence Derrickson is off limits. Or so Toni has been telling herself ever since the first time she saw him. Sure, Lawrence is a devastatingly handsome vampire, but she has a boyfriend—one who’s safe and comfortable, if not exciting or reliable or trustworthy. Besides, what would someone like Lawrence want with her? Toni’s fast approaching thirty, and she still doesn’t know what she wants to be when she grows up. But her heart urges her to take a chance and leave her predicable life behind her to explore the inner-workings of Lawrence’s heart.

Lawrence feels he’s finally found a home, and the love of his long life in Toni, but trouble soon finds him in Stone Haven, forcing him to decide what matters most—desire or duty. Family or his own heart.

Fate can be a fickle, callous, evil tormentor…

Attending a wedding solo sucked. Toni actually liked them otherwise, mostly because they were an excuse to dance. And in the itty-bitty town of Stone Haven, Pennsylvania, the only place to dance was the Jazz Hall, but good dance music was not regularly on their schedule. Although her kitchen made a perfect dance floor, it lacked a certain something in the ambiance department.

As she waited for the best man to finish his toast, which had turned into a rambling story about his drunken escapades with the groom, Toni spun her wine glass around and around by its stem. Finally, someone had the sense to take the microphone away from him, and the emcee announced the couple’s first dance. Toni snuck a glance across the table at Birdie and Uncle Jim, who were watching the bride make her way to the stage with a good deal more interest than she felt. Birdie’s smile was so genuine, Toni vowed to at least pretend to enjoy herself. The mother of the bride, an old friend of her aunt’s, cried as the couple began swaying to a top ten pop song.

A cute couple. And a fine venue for a wedding. The Lakehouse was a highly rated restaurant along the second-largest man-made lake in the state. Decked out in white fairy lights, inside and out, the restaurant looked especially charming that evening. How much must it have cost to rent the place for a night?

Likely more than she made at the shop in a year. But whose fault was it that, even working two jobs, she likely couldn’t afford a wedding here?

No one’s but hers.

“I’m grabbing a drink,” she whispered to her aunt. “Want anything?”

Birdie shook her head, still enthralled by the dance. Her uncle’s drink, a soda, sat full in front of him. Might as well make use of the designated driver. Toni stood, pulling down the black and gold lace dress that had ridden up her legs, and downed the last of her wine.

The indoor bar was closer, but she found herself walking toward the pop-up one on the deck. Toni pushed open the door and breathed in the fresh mountain air. She really should get away from town more often. While The Lakehouse was only twenty minutes away, it was nestled between the State Game Lands on one side and residences on the other, providing an ideal view. During the day. The same mountain range that graced the outskirts of Main Street back home rose high into the night sky, though only shadows were visible in the dark.

While the bartender refilled her glass, Toni looked down to the docks below and watched the pontoons and speeders sway each time a wave made its way toward shore. Despite the hour, boats continued to roam the lake. During the summer months, Stone Haven and the surrounding areas were popular with tourists, something townspeople bemoaned but were secretly proud of.

“Thank you,” she said, taking her newly filled glass.

“You work at Ye Old Curiosities,” said a woman next to her.

Toni tried to place her.

Remembering people was not one of her finest qualities.

“I do,” she said, her tone polite. “I’m assuming you’ve been there before?”

“Thanks,” she said, accepting the compliment on behalf of her aunt and uncle. Although she’d worked at the shop for years, she was only an employee. Birdie and Uncle Jim were the ones who’d made it their life’s work, selling everything from antiquities to novelties, the more eccentric the better.

“You can practically believe vampires are real when you go in there,” the woman added with a smile.

Toni couldn’t help but smile back. Part of her wanted to shock the woman by revealing the truth—vampires werereal, and two of the originals had just moved to Stone Haven.

“Nice wedding,” she commented instead.

“Extremely,” the woman said as she waited for her companion to get his drink. “Do you know the bride or groom?”

“My aunt is good friends with the bride’s mom.”

Toni knew the mother well enough, but the daughter had been sent away to boarding school as a young girl. She’d only come home for holidays and summer vacations, so their paths hadn’t crossed often.

An odd thing, sending your kid away. Her parents had both been career-driven and ambitious, but they never would have considered such a thing. Shaking away the thought, she smiled at the quirky woman and stepped away.

Toni sipped her wine, not a bad Pinot Noir for a wedding, and watched as white dots bobbed and weaved in the distance, the water below nothing more than a mass of black from this distance. Mesmerizing. Even though she couldn’t see the water, just knowing it was there brought her a sense of peace as it always did.

In a former life, Toni must have been a mermaid. Or a pirate. Or something having to do with the water. Did everyone love it as much as she?

Her train of thought was broken by a prickling awareness. Someone was watching her.

She didn’t have a sixth sense like her best friend, Alessandra, did. She wasn’t one of the Cheld—a line of superhuman beings created to counterbalance vampires. She wasn’t the one who’d led the vampires to Stone Haven, and yet she could tell one of them was currently watching her.

Toni turned to look at him, her heart lurching as it did every damn time he was near.

What in blazes was Lawrence Derrickson doing at her wedding?

Well, not precisely her wedding, but she hadn’t seen him at the ceremony earlier or any time before now. She was pretty sure she would have noticed. When it came to Lawrence, she couldn’t help but notice. He was a six-foot-plus, sandy-haired, green-eyed vampire, for heaven’s sake. And sure, it turned out vampires weren’t the gothic, garlic- and daylight-phobic creatures popular culture set them out to be, but they were still practically demigods. They were immortal, and they drank blood, for God’s sake.

Pretending she hadn’t seen him wasn’t an option. There were no more than ten people out here on the deck, the bartender included, and Lawrence was staring straight at her. She couldn’t see his eyes from here, but Toni knew their piercing green color. He was Alessandra’s friend and trainer, an ever-present part of their circle. Avoiding him was difficult, but that hadn’t stopped her from trying. She’d gotten quite good at it in the past two months.

Well, not quite a man, actually. He was so much more.

But it couldn’t matter. Even if Tyler wasn’t the best boyfriend in the world, he was hers. And at least she was committed to something in her life. Being with him felt safe, a word she’d never use to describe how she felt with Lawrence.

The thought of Tyler made it easier to ignore Lawrence and the sidelong glances he always gave her. It made it easier to pretend she didn’t wish there was some admiration or affection in his eyes. Truth was, Alessandra’s friend looked at her as if she’d just stolen a treat from his dog. No, not that. It was like he could see something in her she didn’t even know was there. Like a bit of icing on her nose. If she hadn’t been thinking about that three-tier wedding cake all night, she’d probably have been able to think of a more profound comparison.

As it was, cake seemed as good an excuse as any to dart inside. Avoiding Lawrence. And maybe herself a bit too. 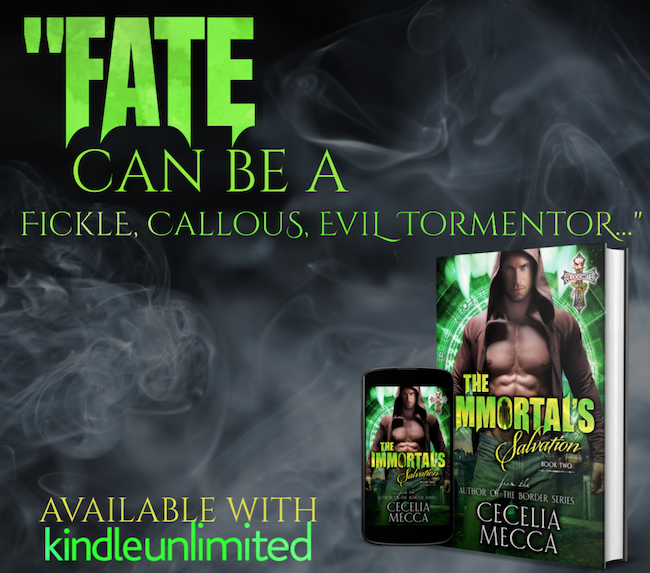 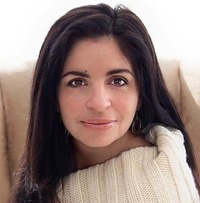 Cecelia Mecca is the author of steamy historical and paranormal romance that transports readers to another time and place.

Every heroine, from Lady Sara in the Border Series to Alessandra Fiore in Bloodwite, is your best friend– the one who kicks ass and takes names. When these ladies meet alpha-males who try to take control, sparks fly until the very last page.

Cecelia writes the Amazon bestselling Border Series which takes readers to an admittedly romanticized time of knights and castles in 13th century Northumbria along the Anglo-Scottish border. In 2019 she’s bring a new type of bad boy to readers– sexy, wealthy, swoon-worthy vampires.

Our Highlander-loving, vampire-writing author can be found in Northeast, Pennsylvania, chai in hand, thinking up new ways to tame both medieval and paranormal playboys. She is firmly House Stark and Gryffindor.

Jump into her worlds with a FREE prequel: http://www.ceceliamecca.com/Insider