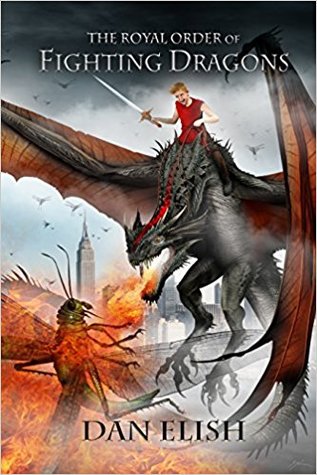 Ike Rupert Hollingsberry is haunted by the past because complete strangers won’t let him forget when his famous father died on the set of The Fighting Dragons, a cult favorite that still has people talking.

But when he’s attacked by a large locust, like the one that killed his dad, Ike is helped by the geekiest nerd of all, Elmira Hand.

“… destined to be a kid-pleasing classic. Readers will be captivated as Ike is drawn into the mysterious and dangerous world … I dare any fan of Harry Potter, Roald Dahl, Wonder Woman, Superman—any rollicking adventure story—to pick up The Royal Order of Fighting Dragons and not get hooked.

Ike was dying. With school about to start he’d never have the chance to tell Diego and Kashvi what was going on now. Why hadn’t he called last night?

Ike looked toward the gate. In keeping with Branford tradition, Headmistress Bergman, a trim elderly woman, had come out to greet the students as they entered the school. He sighed.

He shook his head, deeply annoyed but unable to say anything. Out of the corner of his eye, he saw Kashvi give her father a quick hug.

But then as Mr. Changar let his daughter go, he squinted into the distance. “Well, well,” he said. “That’s certainly interesting.”

Ike turned and looked. On the far horizon, over the Hudson River, was a large black dot. It was interesting—also strange.

Diego brushed his hair out of the way and squinted. “It’s a black dot,” he said. “What’s the big deal? Nothing to worry about.”

Ike wasn’t so sure. To his alarm, the dot was picking up speed and growing larger and larger by the second. It wasn’t making enough noise to be a helicopter and it didn’t look wide enough to be a plane.

But whatever it was, it was certainly something. In fact, the dot was coming so fast now most everyone else in the vicinity had noticed it, too.

Ike didn’t think so either. It wasn’t tall or thin enough to be a tornado. But as the dot grew bigger, he did notice two longish spires curling off its top. And the closer the dot came, the taller the spires grew until Ike suddenly knew what they were.

“Antennae,” he whispered with a shiver.

What else could they be? Worse, it wasn’t long before Ike noticed the dot had a mouth. And atop its back was a barely discernable blur, the rapid fluttering of two powerful wings. Then all the disparate elements—the antennae, the mouth, and wings—seemed to meld together, revealing its unquestionable identity.

A day earlier, Ike would’ve said the bug was a giant robot or a clever special effect. But that was a day earlier.

“Who cares if it’s real?” a parent yelled. “It’s bigger than a subway car.”

With the locust two blocks away, the sidewalk exploded into a cacophony of terrified shrieks and shouts as parents and kids alike ran for it, scattering lunchboxes and knapsacks as they went.

“Come on,” Diego said, tearing for the street. “We’re out of here.”

But Ike was frozen with equal parts terror and disbelief. The bug was a block away, thundering ten feet over the sidewalk as though it had been shot out of a cannon. And now that it was closer, Ike could finally make out its body in more detail—its four small front legs and two giant back ones. Its scaly, light green skin and, worst of all, its eyes. Two giant black circles, one on each side of its head—focused directly on him.

“Ike?” Diego called from behind a parked car. “Come on. Hide.”

Ike wheeled around, looking frantically up and down the sidewalk. Hide? Suddenly, there wasn’t enough time. The school door was too far away and the cars were all locked. With the raging bug seconds away, Ike knew there was only one thing that could save him … 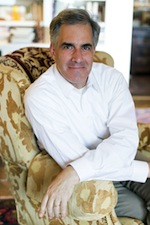 Dan Elish is the author of nine novels, including The School for the Insanely Gifted, BORN TOO SHORT: The Confessions of an Eighth-Grade Basket Case, an International Reading Association Students’ Choice Award Recipient (Simon & Schuster), the book for the Broadway musical13, slated to be a movie by CBS Films, and The Worldwide Dessert Contest, which was recently optioned for TV. In addition, Dan is a writer of TV shows like PBS’s Cyberchase.

Dan has received fellowships and scholarships to the Bread Loaf and Sewanee Writers’ Conferences and is represented by Matt Bialer at Greenburger Associates. He lives in New York with his wife and children.