Now, she’s putting herself through college, avoiding all things fight related, and keeping her fists to herself. That is, until her uncle’s failing health draws her back to his gym and her old pounding grounds. With her demons still haunting the cage, she’s determined to keep up the wall she’s so carefully constructed between the past and present.

Until pro-fighter Max Estrada saunters into her life.

The temptation to go glove-to-glove with the sexy Columbian is too much, drawing her back into the world of MMA—a world where her ex-partner reigns as current Middleweight Champion. The secret they share is a liability to his career, and he’ll do anything to keep her quiet. If she wants her old life back, and a future with the fighter she’s fallen for, she’ll have to do more than just survive. With her life on the ropes, she’ll have to face her past and fight like she’s never fought before.

The alcohol probably wasn’t helping. The side of the bathtub, cool against the back of my legs, felt as if it would fall out from under me as I stared at the water pouring from the bathtub’s faucet and over the cuts on my leg.

I went to scrub the soap into the cuts, but my wet shirt kept getting in the way. Every time I moved, it stuck to my skin.

Wrapping the hem of my long shirt around my fingers, I lifted the shirt up, over my head—

“Woah, there, Tori. What are you doing?”

“No, it’s not,” Max said as he yanked my shirt back down.

“Well, yes, it is. You can go change in a second. Tori, put your shirt down.”

He sighed. “Because you’re drunk.”

“Which you are definitely not wearing right now.”

His reaction was making my skin burn again, but this time, I couldn’t figure out why. Was it because he so didn’t want to see me without a shirt? Was it that bad? I mean, compared to Cheyenne sure, but still.

“The idea of seeing me shirtless is that awful, huh?”

He tugged. I rolled forward, giving up the shirt.

“I know I don’t look like your lingerie model of a girlfriend, but jeez.”

“Tori.” The conviction in his voice made me stop blabbering like a damn idiot. His fingers found my chin and tilted my head. He was so close. The brown of his eyes were darker in this light, making his eyes look like black pools.

“Should you ever wish to yank your shirt off in front of me when you’re sober, I definitely will not stop you. It would be the opposite of awful.”

Had he gotten closer? And what did he mean by opposite of awful?

His lips were swollen; he must have taken one hit to the mouth before knocking the other guy out.

The alcohol didn’t do as much to my brain as being around Max did. Everything about him teased me in some way. His adrenaline teased out my own. I wanted to pull him against me. I wanted to find someone to fight in an octagon. I wanted to be me again, whoever that was, and I wanted to be it with Max.

“Tori,” he said again, and I tore my gaze away from his mouth and back to his eyes. A wave of shivers started at the top of my spine, my skin prickling as it passed through the rest of my body. The look in his eyes…it was quite possibly the best thing I had ever seen.

He continued a moment later. “But right now, you are drunk. So your clothes are staying on.” 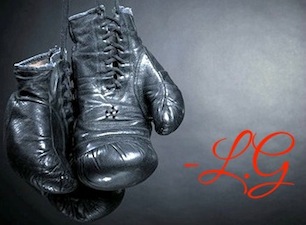 L.G. Kelso writes authentic sports fiction about characters falling in love with combat sports and also each other. She’s a fan of anything that bashes gender stereotypes, and she can be found in her MMA gym when not writing.

Visit her website at http://www.lgkelso.com for more information about her and upcoming projects, including another book in the Whatever It Takes universe.