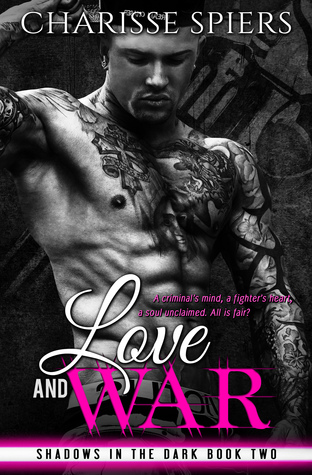 Note from the author: This is a Dark Romance. If you do not like dark themes this book may not be for you. Suitable for audiences 18+ due to content.

The f*cking lights. They are all I can remember. Everywhere I turn I see them. They haunt my dreams, and now my reality. She liked the lights. I do remember that. It was part of her life, and in turn a part of mine, until the day I forgot it all.

They say your childhood paves the way to adulthood, and maybe it does. I know mine was lit up in flames. I walked the roads of Hell until I figured out that the only way to survive was to exist under a cloak of darkness—to deal with the devil himself. It was the only way to escape the pain, the torment. But the nightmares are still very real. They’ll never leave me alone. The shadows of solitude follow me wherever I go.

Weapons—they can be anything I need them to be. Unlike people in my life, they are predictable, dependable. Without any effort they can cause so much destruction, but also so much peace. Through the internal chaos, the anger that won’t cease, and the constant noise, everything is silenced with the pull of the trigger.

Ink—I’ve loved it since I can remember. It defines me. It’s my release. When I feel like I’m about to blow I turn to the needle. It is the one high I need. I brand people. It’s what I do. Kross Brannon is the best there is when it comes to tattoos. The success of my company proves it.

But I never teach. Those that work for me learn from someone else. I’m a solo artist. Always have been and always will be…but then I looked up and saw her, standing in my shop, beautiful, tattooed, and her soul screaming for me to reach out. She was a force of nature I couldn’t turn away.

That’s the moment everything started falling into place…

I group my tips together and fold them in half. I’ll count them later. Right now I just want to take these shoes off my feet. Dancing in stilettos sucks. They were not intended to be worn for extreme activities. Then again, maybe they were. I prefer chucks, high tops . . . Hell, anything flat. These are more Lux’s style.

I’m sweating; burning up, even though I know Chuck keeps it cold in here. Keeps the nipples out, he said, and nipples make the customers happy. I roll my eyes at the memory of that conversation from my first night. I thought he was ‘the shit’ back then. My way out of a shitty, unwanted existence. A way to live on my own. And it was . . . Until I wanted better for myself.

My thighs and calves are burning. I’m ready to go home and shower, to crawl into bed with a movie in the background as I fall asleep, but unfortunately that won’t happen anytime soon for me. I still have another set later.

I walk into my dressing room and shut the door. “Lock it.”

I nearly jump out of my skin at the sound of his voice, my hand immediately snaking over my breasts to cover them. Reflexively I lock it without questioning him. His tone is a little . . . harsher than usual, and his irritation is nothing new to those that work for him.

I look at him sitting in my chair, hunched over, legs spread wide with his elbows to his thighs, holding a lighter between them—my lighter, in fact. In a hypnotic rhythm he strikes it, causing the flame to emerge before letting it go. He’s looking at it and not at me, as if he’s trying to cool some sort of fury inside of him. My heart begins to race. I can feel my pulse beating along every passage in my body. My nerves spark like two wires being touched together with opposite charges. My oxygen tries to recede back into my lungs. I force the words out. “Kross . . . What are you doing here?”

He looks up at me, a cold, stone-like demeanor present, emotion absent. The words come out as controlled as he is. “Come here.”

His eyes look different—determined, angry maybe. My feet automatically move toward him. I should stay where I am, but instead, I quickly tread across the floor to where he sits. The second I get to him he stands and grabs my neck so fast I can barely blink between movements. He forces me to sit on top of my vanity, head against the mirror as he comes between my legs. “What the fuck are you doing here?”

I grab his wrist as a reflex. “Kross, I’m working.”

He looks down my almost-naked body, his judgment cutting into me like a serrated edged knife. If I didn’t already feel like trash I would with just that look. “I can see that. What happened to the damn bar, Delta?”

He’s seething. Fear sets in. Little to nothing scares me. I’ve worked for him for a while now. I’ve seen him on a daily basis and in many different moods. I’ve never heard this tone before. It’s bordering on psychotic. And his eyes. What’s wrong with his eyes? His grip tightens, but still not enough to hurt me in ways I can’t take or cut off my air. Because even though he’s holding me in a way that most would deem abusive, no bone in my body feels like he would physically hurt me. The only thing my mind can process is the fact that he’s close, and that he’s touching me in a way I’ve wanted him to since I laid eyes on him. He’s looking at me like I’m his, like he’s angry with me. I stare into his eyes, unable to look away even though I can’t read them. “Answer me.”

I found books when I was going through a hard time in life. They became my means of escape when things got bad. I realized quickly how much I loved to take a backseat to someone else’s life and watch the journey unfold. That began my journey with books in November of 2012. I constantly had a book open on my Kindle app. Never in a million years would I have imagined myself as a writer, because I never thought I was creative enough. I’m living proof that things will fall into place when they’re meant to be. People will make their way into our lives when we don’t expect it, setting the path for what we are meant to do. Never give up on people. Never stop taking a chance on others. Someone took a chance on trusting me with her work when she didn’t know me from a stranger on the street and gave me the opportunity of a lifetime as our relationship progressed, which led me to editing and writing as well. This is my dream I never knew I had. As soon as I sat down and gave writing a shot, it was like the floodgates opened. Now, I am lost in a world of fiction in my head, new characters constantly screaming for their stories to be told. Continue to dream and to go for them. No one ever found happiness by sitting on the sidelines. Sometimes we have to take risks and put ourselves out there. Thank you for all of your support, and may there be many books to come. XOXO- C