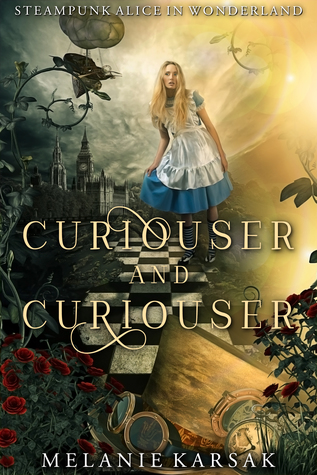 To save the Hatter, Alice must work with the one man she despises so much that she might still love him.

Alice thought she’d turned over a new leaf. No more working for Jabberwocky. No more making deals with the ruthless Queen of Hearts. No more hanging around The Mushroom with tinkers, tarts, scoundrels, and thieves in London’s criminal underbelly. But she’d been bonkers to dream.

Hatter’s reckless behavior leads Alice back to the one person she never wanted to see again, Caterpillar. Pulled into Caterpillar’s mad schemes, Alice must steal a very big diamond from a very royal lady. The heist is no problem for this Bandersnatch. But protecting her heart from the man she once loved? Impossible. 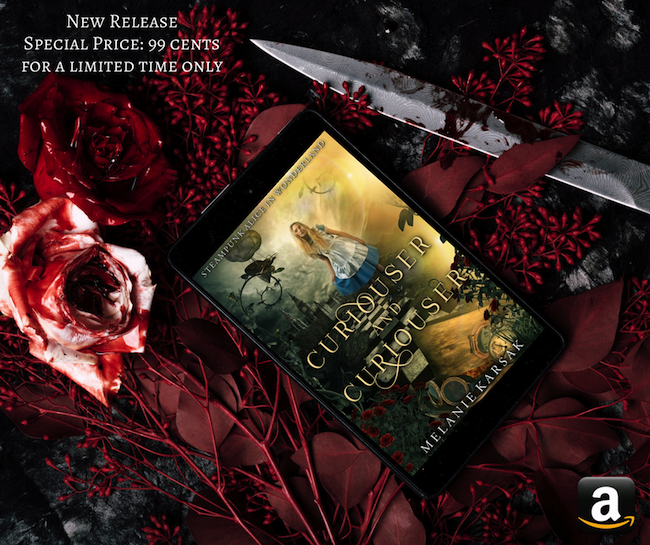 “If you say it again, I’ll stab you,” I said as I struggled to adjust the formal gown. The bulging bustle of fabric on my backside made my lower back itch, and my corset was too tight. A proper lady’s gown indeed, but I wondered how anyone who dressed in proper fashion got anything done. I touched the brim of my tiny top hat. It, along with my parasol, were the only pieces of the outfit I actually liked. Of course, the parasol had a feature that allowed me to slip the White Queen into the shaft to serve as a handle. Leave it to the Countess to think of that.

“All I said was that you look lovely. I hardly think that’s a stabbing offense.”

“Shows what you know,” I replied as I eyed him sidelong. He had changed into a fine suit and wore a black top hat. I both hated and loved being there with him. My conflicting emotions made me cranky.

“Tickets,” said a man standing just outside the door of the Crystal Palace.

The man stamped the date on the tickets then handed them back. Nodding, he motioned for us to enter.

Taking me gently by the arm, as a gentleman ought to do, William escorted me inside.

While the Crystal Palace’s ornate structure, made of glass and iron, towering several stories high was a sight to behold from the outside, nothing quite prepared me for the marvels inside.

As we entered, a cacophony of sounds reached our ears. The sweet melodies coming from a stand of self-playing harps, the screech of monkeys, the hum of machines, and the sounds of hundreds of voices rolled to our ears all at once.

The structure had been built around the tall ash trees that had stood in the park. They still stood standing tall in the middle of the structure. Fountains lined the center promenade. The crowd gasped and stepped back as a group from Africa passed on their way toward their display, lions on leashes walking in front of them. Not far behind them, a man wearing a straw hat jogged past pulling a rickshaw, two laughing—and elegantly dressed—ladies inside.

I gasped as a man flew overhead on wings made of lightweight material. To my great surprise, he flapped his wings, the metal of the clockwork bones and joints revealed when the sun overhead struck him just right.

William chuckled. “Shall we take it all in?”

Barely able to breathe, I nodded.

“Now, there is my Alice,” he said softly. “Her curious eyes open wide.”

I smiled. “It’s a wonderland.”

New York Times and USA Today bestselling author Melanie Karsak is the author of The Airship Racing Chronicles, The Harvesting Series, The Burnt Earth Series, The Celtic Blood Series and Steampunk Fairy Tales. A steampunk connoisseur, zombie whisperer, and heir to the iron throne, the author currently lives in Florida with her husband and two children. She is an Instructor of English at Eastern Florida State College.

Newsletter: Join Melanie’s “Once Upon a Time” VIP newsletter and get TWO FREE BOOKS and an EXCLUSIVE Curiouser and Curiouser Adult Coloring Book Download