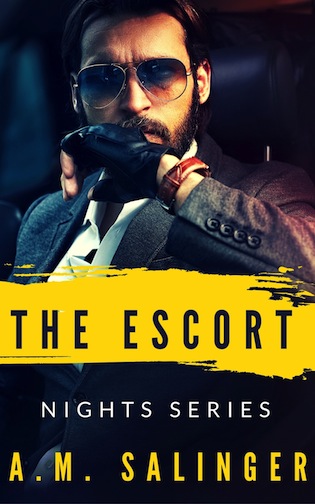 He is everything I’ve ever wanted in a man. And I will do anything to get him. Even if I have to lie to him — Ethan

He is a sinful temptation. A guy who loves pushing all my buttons. But I can’t touch him. And I most definitely cannot have him — Joe

Ethan Skye has had only one goal in mind since the first night he walked into Saron, the most exclusive gay club in Tokyo: to win the heart of Joe Cavendish, its brooding owner and the man he’d fallen in love with at first sight. When Ethan takes a job as a bartender at Saron to get closer to Joe, little does he know that his actions will set him in the sights of an obsessive admirer.

Jaded by his troubled past and with his heart very much guarded, Joe Cavendish has one strict rule in life: never mix business with pleasure. Unfortunately for Joe, one cocky, sexy bartender seems intent on testing that resolve to its very limits, and Joe finds his patience and his libido increasingly challenged as he fights his growing attraction for his new employee. But after Joe discovers the danger Ethan is in, his possessive instincts compel him to take on the role of Ethan’s personal bodyguard and pretend lover.

Can Joe protect Ethan from his increasingly violent stalker and maintain his own sanity while he gets up close and personal to the alluring young man storming his way inside his numb heart? Will Ethan overcome Joe’s stubbornness and convince the club owner to take a chance on love? Or will the secrets they’ve been keeping from each other threaten their fragile, burgeoning relationship?

Discover Ethan and Joe’s story in this second novella in the hot, contemporary romance series Nights by A.M. Salinger.

This is a MM romance with a HEA.

Request a review copy of The Escort here!

Joe Cavendish swallowed a groan as he stared at the tantalizing ass ten feet from him.

That little tease. I’m sure he’s doing it on purpose.

“Do you have to be on your hands and knees for that?” he said with a sigh. “It’s not exactly as if I’m a fucking slave driver, you know. I did just buy one of those ridiculously expensive mopping robots for the staff to use.”

Ethan Skye looked over his shoulder and narrowed his eyes at Joe where the latter sat at the bar drinking a coffee.

“Your robot knows dick about oak floors. And I’m not cleaning. I’m fixing the scratch that asshole made when he dragged that metal case in here yesterday. I mean, who the fuck lugs that kind of shit around? And, FYI, his gin tasted like crap, so we’re not getting it.”

Joe arched an eyebrow and glanced around Saron’s opulent interior.

“You do realize I own the place, right?”

Ethan gave the floor a final wipe with a polishing cloth and rose to his feet.

“And I’m your best bartender. What’s your point?”

He placed his toolbox on the counter and studied Joe with a haughty expression.

Joe couldn’t deny the truth of his words. Although Saron had rapidly gained a reputation as the most exclusive gay club in Tokyo since he first opened for business four years ago, part of its phenomenal success of late had a lot to do with the stunning blond with the captivating green eyes who had waltzed into his club eleven months ago and demanded he give him a job.

It wasn’t every day that someone made Joe Cavendish look at them twice. Ethan Skye had made him look twice, three times, and a dozen more after that.

That fact alone should have had Joe running hell-for-leather in the other direction. He couldn’t recall the last time his body had had such an immediate, visceral reaction to a stranger, even during his years working as an escort. Still, he’d found himself unable to deny the demand in the mesmerizing green eyes that had bored so intensely into him and had reluctantly invited the young man back for an interview the week after.

Surprise had darted through Joe when Ethan had pulled out his résumé and asked if he could do the interview there and then, offering the club owner a foretaste of his bossy nature. Joe had taken the professional, double-sided sheet and studied it with a frown.

“Says here you’re a Stanford business graduate.” He’d looked up into Ethan’s cool expression. “Why the hell would you want to be a bartender in Shinjuku?”

“I’m not made for a city job. Besides, I almost flunked business school.”

Joe had bought that cock-and-bull story about as much as he believed in Santa Claus. He’d been around the block enough times to tell when somebody was harboring secrets. After all, he had some pretty dark ones of his own.

Ethan had passed his interview with flying colors and didn’t even blink when Joe challenged him to make Saron’s trademark cocktail and give it his own personal twist. One sip of the intoxicating drink Ethan made was all it took for Joe to realize he shouldn’t let the cocky blond slip out of his hands and into a competitor’s clutches.

In the months since Ethan had been at Saron, the bartender had become a key member of his staff. He got on with everyone, including the normally taciturn doormen, and had charmed all the patrons with his quick wit and exquisite drinks. The fact that he was goddamn easy on the eye didn’t hurt either.

Had Joe known at the time the fresh hell he would be inviting into his life by giving Ethan the bartending job, he would probably have refused the young man. Joe knew a lot of the club’s patrons would kill to get their hands on Saron’s newest bartender. Not only was Ethan drop-dead gorgeous, he had also been blessed with a naturally athletic physique; just enough muscle not to be brawny and the entire package perfectly toned in all the right places.

Places Joe had been aching to touch for months.

As days turned to weeks and weeks to months, the spark that had been there between them from the start had ignited into a maelstrom of full-blown lust that had Joe’s cock aching most times he came within twenty feet of the alluring bartender.

It didn’t help that he’d once walked in on Ethan in the staff changing room and gotten an eyeful of the delicious body he’d been fantasizing about. Joe had wondered for days afterward how many men had kissed the mole he’d glimpsed on Ethan’s right hip, just above his low-riding briefs. And how many more had tasted his honey skin and claimed his tight ass.

The fact that Ethan wouldn’t refuse Joe made their situation all the more bittersweet. He had made it abundantly clear he was gay from the first day he started working at Saron. And just as Joe’s eyes seemed to gravitate to Ethan whenever they were in the same room, Ethan always tracked him with his heated gaze in return.

But even though Ethan had turned the carefully ordered life Joe had built over the last few years upside down and had become the source of some of Joe’s filthiest fantasies, hooking up with the young man was the one thing the club owner wouldn’t let happen. He’d had his fingers burned once before when he’d mixed business with pleasure, and he’d made it a rule never to do so again.

Unfortunately, Ethan didn’t seem to agree with him on the clear dividing lines Joe had set from the start of their working relationship. He was constantly pushing at the boundaries, testing the limits of Joe’s patience and his raging libido.

Just as he was doing right now.

“I’ve spoken to our regular gin supplier,” Joe said with a grunt. “It seems the shortfall we’re experiencing is going to last some time. We need to find another company to get our stock from.” He hesitated. “Eveline can probably—”

“No!” Ethan snapped. The mere mention of the name Joe had just uttered made the bartender grit his teeth. “Give me a day. I’ll get you another supplier by tomorrow.”

Joe bit back a frustrated sigh at Ethan’s stormy expression. He still didn’t know how Ethan had discovered his connection with Le Secret, the internationally renowned, upscale escort service Joe used to work for before he started Saron. It sure as hell hadn’t come from one of Joe’s other staff, who knew nothing of his past.

Though he was no longer in Eveline’s employ, Joe still accepted the odd gig from her. After all, she was the one who had saved him from the nightmare he’d been living in when he worked in the shady underworld of New York’s sex and strip clubs between the ages of fifteen and twenty-four. He also owed her big time for the loan she’d given him to set up his own business, money he’d paid back within a year of opening Saron’s doors.

That most people would find his background and previous lifestyle distasteful was not something that kept Joe awake at night. Yet Ethan’s reaction when he’d first challenged Joe about the jobs he still took on for Le Secret’s owner had stung. It wasn’t judgment Joe had read in Ethan’s eyes that day. It was resentment and frustration that Joe could willingly sleep with a complete stranger but not lay a finger on him.

Joe considered the young man presently scowling at him; he knew not to disbelieve the words he had just spoken. Ethan had made similar promises in the past on the rare occasions Joe had been in a fix and always delivered on them. Joe narrowed his eyes.

“I’d really like to know who your source is.”

The corner of Ethan’s mouth lifted in an insolent smile that made Joe want to kiss him hard.

“I’m afraid I would have to kill you if I revealed that information.”

A bark of laughter left Joe’s lips at the threat. His groin tightened at the torrid image that flashed across his inner vision. Of Ethan slowly and sweetly killing him with his exquisite body while he straddled Joe and rode his cock, his sexy hips undulating with every hard thrust of Joe’s dick while his filthy mouth opened on throaty cries and moans.

“Here, pour me another coffee.”

Ava Marie Salinger is the pen name of an Amazon bestselling thriller author who has always wanted to write scorching hot contemporary and erotic romance. In 2017, she finally decided to venture to the steamy side. NIGHTS is the first of several sizzling series featuring sweet, sexy men and women with dark pasts and a whole lot of love to give to the ones brave enough to fight for their hearts. When she’s not dreaming up hotties to write about, you’ll find Ava creating kickass music playlists to write to, spying on the wildlife in her garden, drooling over gadgets, and eating Chinese.

Want to be the first to know about Ava’s new releases and get access to exclusive content, sneak previews, sales, and giveaways ? Then sign up to her Reader Group here: https://www.amsalinger.com/subscribe/