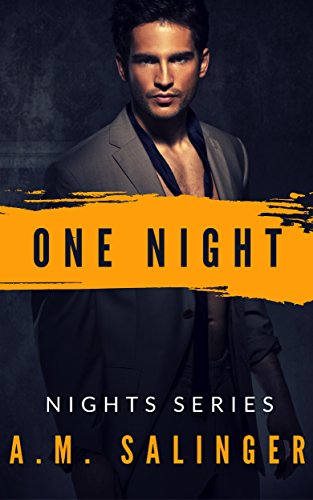 This is my first M/M romance. I wasn’t sure what to expect, but I’m not sure I got what I wanted in One Night by AM Salinger.

First, I want to say that this book is extremely well-written. ‘Discrete’ is even used correctly (if you’re using it outside mathematical and scientific usage, that is), which really impressed me. The beginning of the book has a LOT of backstory. We could have had a couple chapters of backstory just play out, really. Salinger makes sure you know pretty much every important thing that happens to the guys in the first two chapters…except one tiny secret that is so heavily hinted at, you kind of get it, anyway. I would have much rather read about these events than read an info-dump of the character THINKING about these events. However, it wasn’t so long of a dump that you couldn’t push through.

Then you get to the one night part of this book. And that is steamy (18+) and, again, well-written. Salinger makes the rest of the book one long night, but it’s sweet. and the ending was somewhat surprising (but not…because it is billed as a romance). There are bits of sweetness that come from both the guys and it mixes into a very nice, intense night.

Mostly, I just wish there were more to the book. I want more story, more fleshed out background (scenes, not info, please) and maybe a bit in the future. This works well as a set-up to the next book about Joe (MC1’s BFF) and Ethan (the bartender). It’s a decent piece of erotica, but there was so little relationship development, I’m hesitant to call it more than that. If you’d like to dip your toes into the world of steamy M/M romance and erotica, this would be a good choice. Grab your copy by clicking the image below.