Christine Warren starts a new series in the world of The Others with Baby, I’m Howling for You.  I have not read any of her books before, but I’m definitely adding them to my list.  While a bit formulaic in the plot line, the characters make this book enjoyable.  The banter between the lion siblings combined with Renny’s teasing-not-teasing of Mick leads to some pretty hilarious zingers.

I give props to Warren.  A couple times, I was certain her female MC was going to go the way of all those before her and do something stupid (at first for pride, then for sacrifice), but each time, Warren seems to rein her in and we are left with reasonable and realistic (for the world) solutions that don’t sacrifice the MC’s strength of character and personality on the alter of being “badass”.

The thing that really impressed me with this book (and I can only hope it continues in all her books) is the dedication Warren seems to have to making the instincts of the animal side realistic.  This book kind of explores the differences in how mating works for different species of animals.  And I really appreciated that.  Mating for wolverines is NOT the same as mating for wolves, and Warren makes sure to include that information and make it relevant to the characters.

Overall, I recommend this book as a light, if somewhat predictable, read.  Truly strong female protagonist + hunky bit of werewolf caveman = fun times for all.

Enter below to win a free paperback copy of this book!  This is exclusive to my blog, not a shared giveaway throughout the tour!  Closes 12:00 AM  EST 2/5/08! (US Entries, only, please!)

BABY, I’M HOWLING FOR YOU:

WELCOME TO ALPHAVILLE, where the she-wolves and alpha-males play. . .for keeps.

Renny Landry is a wolf on the run. Pursued by a shapeshifting stalker and his slobbering pack of killer coyotes, she is forced to flee her job as a librarian to find sanctuary in the wooded hills of Alpha, Washington. A well-secluded safe space for troubled shifters, Alpha is Renny’s last hope. But the first person she meets there is a gorgeous alpha male with fiery eyes, fierce tattoos, and one ferocious appetite—for her…

Mick Fischer thought he left his past behind when he moved to Alpha. But fate has a way of biting him in the tail when a female wolf shows up on his property. Wounded, desperate—and disarmingly hot—Renny brings out the snarling, protective alpha beast in Mick like no other woman he’s known. Can these two haunted, hunted wolves manage to mate for life…even as the deadliest past demons howl at their heels? 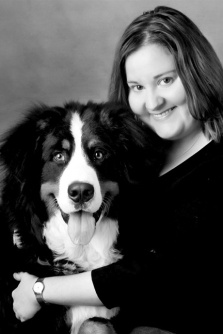 CHRISTINE WARREN is the bestselling author of The Others series, including Wolf at the Door, Big Bad Wolf, Born to Be Wild, Prince Charming Doesn’t Live Here, and Black Magic Woman.

Born and raised in coastal New England, she now lives as a transplant in the Pacific Northwest. (She completely bypassed those states in the middle due to her phobia of being landlocked). When not writing, she enjoys horseback riding, playing with her pets, identifying dogs from photos of their underbellies, and most of all reading things someone else had to agonize over.