Aereon has found the Creators.

He’s crossed seas and mountain ranges to reach them, tangled with dwarves and ogres along the way, escaped the clutches of an icicle wielding irate yeti to rescue them and now they tell him that they weren’t in any great need of help.

A revolution has sparked in the realm of Hudikvar, because of something things Aereon might have said to a troop of homeless youths. Now, King Victarian is after Aereon and anyone associated with him.

Local woodsman, Lars, has agreed to help them flee and be their guide through Oak’s Wood, but even he cannot guess what lies in wait for them within. Not now the Lord of the Primes is about to wake.

‘He’s got a touch of destiny about him, that one,’ said the Dealer.

‘And she’s ordered the lobster,’ said the Teller.

The Greenmen  by Linden Forster is the second installment in the Hero’s Arc series.  Forster brings us right back to where we left our heros.  However, he also gives the reader a tiny bit of insight into this second aspect of the world.  I normally hate info-dumps before each book, as I feel they’re pretty redundant.  While Forster does revisit the creation myth that he told in the first book, Divine, he also changes it enough that it feels like a completely different bit of information and it remains just as engaging as the first time around.

The tongue-in-cheek humor is back full-force, and though some of the jokes this time around feel a bit strained or forced.  It’s almost as if Forster was trying to live up to the Monty Python-esque humor he developed in Divine and overdid it.  He also seems to have fallen into the terrible trap of trying to kill the reader with inane details.  I don’t recall this being an issue in the first book, but it could have been overlooked.

The interactions between the Creators and Aereon are pretty interesting.  You don’t see much interaction between them during Divine, so to see them fall back into the same pattern of thinking that they supposedly changed just because of Aereon’s presence is pretty natural.  They still act slightly differently around the others, but their treatment of Aereon and the way they talk to him are identical to the way they behaved in the beginning.

Transitions are a bit rough.  There is not much demarcation between POV changes, so it sometimes took me a bit to change gears with the POV changes.  Even just  3 asterisks between the different POVs would have been helpful.  Hopefully this is a formatting issue that is resolved in the published version.

The best part about this book is that it really just flows along and you find yourself entranced by the idiocy and comedy on every page.  I say it pretty much ever time I come across it, but I really love banter done well.  It seems to be pretty rare, but Forster definitely is able to keep up.  The rolling “Who’s on First?” style conversations are entertaining and a great way to give information without making it feel like a sermon.  While I really saw Monty Python in Divine, The Greenman definitely has more of a Terry Pratchett feel.  The humor and banter is a bit different, but still amusing.  Woven through all the humor, though, is still the story of growth and justice.  The mystery of Aereon’s companions rumbles through the background.  The whole book is definitely worth reading.

Also,  EASTER EGG!  I love when authors reference other pop culture in a sideways manner.  Pretty sure anybody growing up in the 90s will know immediately what this references (if you don’t, look it up!).  However, the editing seems to have gone awry.

There’s quite a few homophones that are misused (symbols instead of cymbals, solute instead of salute).  This is easy to overlook if you read phonetically.  However, if you’re a whole-word reader like I am, it becomes a bit of a nuisance because the word doesn’t fit and it causes my brain to stumble.  The good part is that the issue isn’t SUPER prevalent.  But it does detract a bit from the experience of reading.  The ending inspires just enough curiosity to wonder if there will be more.  Definitely recomend. 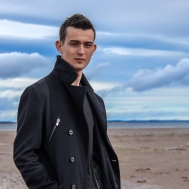 Linden Forster began writing at the age of seventeen. Divine Invention was his debut novel and it took seven years from the idea conjuring at the back of an English class to reaching the page.

Since then, writing has become his dream and passion. The Greenmen is the second in his fantasy series, The Hero’s Arc.

He is a lover of nature and enjoys walks in the country and often ventures out armed with a notepad and pen.