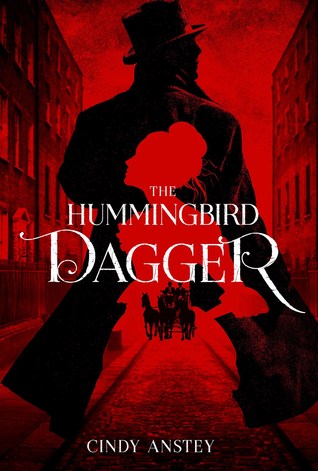 From the author of Suitors and Sabotage comes a suspenseful and enthralling new Regency novel, perfect for readers who like their Jane Austen classics with a side of mystery and murder.

1833. A near-fatal carriage accident has deposited an unconscious young woman on the doorstep of Hardwick Manor and into the care of young Lord James Ellerby. But when she finally awakens, it is with no memory of who she is or where she came from.

Beth, as she calls herself, has no identity; the only clue to her circumstances is a recurring nightmare of a hummingbird, blood dripping from its steel beak.

With the help of James and his sister, Caroline, Beth tries to solve the mystery of her own identity and the appalling events that brought her to their door. But nothing could prepare her for the escalating dangers that threaten her and the Ellerby clan. From the hazardous cliffs of Dorset to the hostile streets of London, Beth will fight to reclaim her past, hunted by a secretive foe with murderous intentions.

The Hummingbird Dagger by Cindy Anstey is not what I was expecting.  I think I saw that the author classified it as young adult and immediately (and erroneously) made a judgment that it would be a simplified, watered-down mystery.  The characters are older and more mature, with the exception of Walter, and fall better into the new adult category.  The story itself is NOT watered down, nor simplified, for younger readers.  The Hummingbird Dagger is a full-blown historical suspense novel.

Pulling on some tried and true suspense tropes, Anstey uses them for a base before dragging some somewhat true-to-period politics and some very memorable characters to the table.  Amnesia, kidnapping, and clueless good samaritans abound (SPOILER:  Who the hell dismisses a frayed and cut rope when they’re trying to figure out how a definite gentlewoman wound up dressed like a street urchin?!)  However, the characters and the motivations in the story make these tropes something new and you get sucked into very early Victorian England quickly.

One thing that really kind of bothered me (it’s a 2-parter) was the slight straying from historical accuracy.  I tend to only be bothered when the book is REALLY close, but not quite there, as this one is…or really wildly different while claiming (overtly or inadvertantly) some amount of accuracy.  The reason that this straying in this book bothers me so much is that it SOUNDS like it is a classic.  It sounds like something written by the Bronte sisters.  This lends it a sort of credibility that many historical novels lack.  Anstey does an amazing job of making the world of The Hummingbird Dagger come to live and seem real.  But there are minor things that really began to bug me.
1. Inconsistencies in societal acceptability:    A big thing that seems to stick out to me is how people behave around each other in regards to society.  The number of times James is alone with Beth in the course of the book is mind-boggling.  If they truly believed Beth to be a member of the upper class, there is no way in hell a ladies’ maid or Caroline wouldn’t have been beside her ALL. THE. TIME.  They would never have gone riding together, etc.  Beth and Caroline would never have been allowed to (and never would have considered) take a carriage with an unknown, unmarried male.  Just because he is older doesn’t mean he’s considered *safe*.
2. Historical fashion:  Who really pays attention to the fashion in books?  People who sew.  I have to say that the issues weren’t dramatic, but if you read about historical fashion as a hobby, there are a few things that stand out when Anstey describes the dresses.  Luckily, she doesn’t bore us to death with the descriptions and they’re pretty easy to skip over.

Formatting is a bit sketchy, but my copy is a netgalley copy and I can’t promise that it would be the same in the retail copy.  As far as the biggest issue?  It doesn’t appear the POV changes are marked, so sometimes I would have to go back to the beginning of the change and re-read to make sure I was understanding everything correctly.

The Hummingbird Dagger is engrossing and engaging.  I found myself pulled in from the get-go with Beth’s mysterious appearance.  I was mildly annoyed by the obliviousness of the characters (nobody ever talks about ANYTHING…they all just dismiss things like there isn’t this giant, looming mystery on their doorstep), but it was not enough to even register until later when I was thinking over the plot.  (in fact…I’m not sure that frayed rope was ever mentioned again).  Overall, though, I couldn’t really put it down.  I loved Beth’s fire and James’ sensitivity.  It was nice to see the slight role-reversal in personality without having it shoved in your face.  The fact that Caroline and Walter got POVs as well as James and Beth saved the book from being a romance.  The romance built slowly and was sweet, but the focus was definitely on the mystery of solving who Beth was and how she came to be on that coach.  I’m now hoping for Caroline and Walter to have their own mysteries and continue the story of this family.  This is a true historical mystery that doesn’t scrimp on authenticity in favor or thrills.  Grab your copy at one of the links below!

Whenever she is not sitting at the computer, throwing a ball in the backyard, gardening or reading, Cindy can be found–actually, not found–adventuring around the world with her hubby.

She has lived on three continents, had a monkey in her yard and a scorpion under her sink, dwelt among castles and canals, enjoyed the jazz of Beale St and attempted to speak French.