Most stories begin with either an unforeseen turn of events or a problem.

Krank has a problem. For centuries, the people of the island have lived on the animals and plants to be found there. It was bliss and so the population grew. It was not until very recently anyone noticed that the quantity of plants and animals had not. The delicate balance of the ecosystem has tipped and food is dwindling.

The King assigned the island’s two resident self-proclaimed geniuses, the Creators, to find a solution. The fruits of their labour ripen into the invention of the world’s first aquatic transportation device and promises to provide passage from the island to search further afield for food and resources.

So, there it is. Problem solved. End of story. Barring any unforeseen turn of events…

Divine Invention by Linden Forster sucked me in from the very beginning.  And within in the first portion of the book, all I kept thinking was, “It’s like Monty Python wrote an epic fantasy.”  Seriously.  What if, all the things that shoudl go wrong in an epic fantasy (but don’t) really did?  What if the king was a buffoon and the queen was a sociopath?  And how did they really come up with the name “boat”?  Forster has a gift for tongue-in-cheek humor that really pulls together this tale.

The story opens with a telling of how the land of Krank came to be…which really kind of sets the tone for the rest of the story.  The characters are sort of like a caricature of most epic fantasies, but mixed a little with urban fantasy.  The main characters are human, but are essentially clueless to the existence of other races/peoples.  It’s kind of insane how clueless they are, if only because they live on an island in the mouth of a river…which means that they should be able to see the other lands and possible life in them.  The problems they face are sort of reflective of current issues facing Earth (over-population/population crowding and food scarcity), but the people are so insulated that it becomes almost comical.

There is a slow reveal of mythology throughout the story, as we are told it through the eyes of men and not any of the other beings.  The process is somewhat frustrating, as Forster will usually only give us information that other characters know when they feel like telling it.  It is actually my preferred way of revealing things in a fantasy, but Forster’s process is even slower than most other authors who use this.  There are occasional snippets of information shared by the narrator, but they are generally foreshadowed as being important later in the story. Usually the information is relayed by other characters, though.  Forster continues to keep the reader engaged by alternating chapters.  Koel and his co-Creator Enid lost in the lands beyond the great water with Aereon and Lirna still in Krank.  My issue with most epic fantasies is that there is a great amount of detail regarding mundane things that make me lose interest.  Divine Invention doesn’t have this problem.  By switching between the two locations frequently, Forster manages to fill the pages without using filler.  Also, maps.  Maps are one of the most important parts of fantasy stories.  Pretty much, if you write a fantasy, you have to include a map so your readers know where the characters are.  Forster sort of accedes to this expected requirement.  Except…the first map only has the island of Krank (no details) surrounded by 2 branches of a river…and white space.  In keeping with his slow introduction of information on anything, Forster slowly reveals the map as the characters discover it.  As Koel and Aereon each delve deeper into their own adventure, the map begins to fill in.

The one thing that doesn’t appear to be 100% certain is who the actual hero is.  I’m leaning toward Aereon, but the inclusion of Koel’s point of view makes it difficult to choose definitively.  Aereon does see definite growth and change on his journey, both mental and physical.  Koel doesn’t until the end.  However, if we follow the ‘rules’ of epic fantasy, the hero’s party seems to be building itself (maybe with the inclusion of Creators instead of mages…though there are quite a few new creatures being introduced at the end).  I have no doubt the parties will succeed, whether through divine invention or divine intervention.

The whole of the story was fascinating and amusing and I’m definitely putting the next book in The Hero’s Arc on my TBR list.  It was a fun and engaging diversion from the usual heavy epic fantasy while still containing the elements that make it just that. 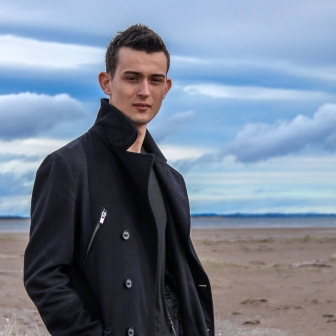 Linden Forster began writing at the age of seventeen. Divine Invention is his debut novel and it took seven years from the idea conjuring at the back of an English class to reaching the page.

Since then, writing has become his dream and passion. His sequel is finished and awaiting publication, while he types the third in a darkened room.

He is a lover of nature and enjoys walks in the country and often ventures out armed with a notepad and pen.