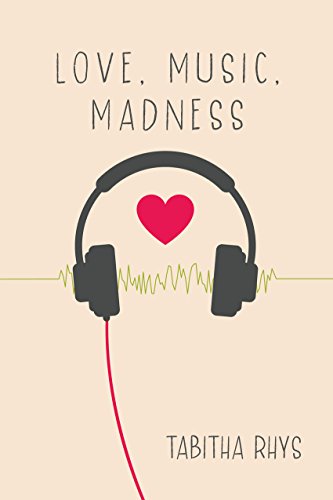 Songwriting partners Lawson Harper and Jessa Warlow’s musical ambitions are derailed when their so-called relationship ends disastrously. However, neither Lawson nor Jessa are willing to give up on the album’s worth of soul-searing songs they wrote together—songs they’re sure are good enough to change both their lives.

Will the chemistry that fuels their creativity drive them to make the record of a lifetime, or only to absolute madness?

First…Tabitha Rhys’ Love, Music, Madness is a pretty good story, but I don’t think that I would ever classify it as a romance (as it was described to me and is advertised online).  It kind of has some second-chance romance aspects, but really…the romance part of the story isn’t the front man of the story.  The romance aspects are more a catalyst to character development.  Sooo…let’s look at those characters.

There are 3 main characters to focus on here (who, coincidentally, form the sort of love triangle thingy that’s going on).  Lawson, Jessa, and Theresa.  Lawson gets first billing because he’s the voice of the story.  To start with, Lawson is kind of a blank slate.  He’s boring and responsible and apparently pretty good looking (even if he has messed up teeth).  But…that’s pretty much all we get out of him–oh…he’s good at music.  For a HUGE chunk of the story, as an MC, he’s pretty weak.  It isn’t until the last 1/3 of the story that he really starts to flesh out.  He, strangely enough, becomes a pretty unlikable character.  This change can be attributed to the ladies in his life, though.  The ‘romance’ part of Lawson’s story is pretty freaking bleak.  There’s no great swooning love.  There’s no quiet sneaks up on you last forever love.  In fact, I’m not sure there’s much love at all.  There’s a comfortable relationship that sticks around LONG after it should be gone and an obssessive fixation that should probably result in counseling–but doesn’t (more on that in a bit).  Strangely enough, though, I don’t feel cheated by this lack of love.  It makes the story feel more like a memoir than fiction.

Jessa is Lawson’s first love.  But…there’s no real passion between them.  This is where the story is lacking most, I think.  The driving factor behind so many of Lawson’s choices is Jessa, but rather than feel that I felt like I was just told how it was by the author.  At no point did Jessa and Lawson feel like the consuming passion that we’re told they were.  But maybe that’s because it’s always one-sided.  The fist go-round it’s Lawson’s passion.  The second go-round, it’s Jessa’s.  The third, well…that’s left to the imagination.  But I have to say that Jessa comes off as a conniving and selfish bitch all the time.  However, Lawson’s treatment of her during round 2 is…well…I’m kind of glad there weren’t details.  What is implied is enough to make me think that Lawson is beyond redemption.  But through all of that, Jessa remains a sort of cardboard construct that Lawson bounces his emotions off of.

This leaves us with Theresa.  Theresa starts off as this sort of gray background character.  Even after she becomes important enough to Lawson to move in together, she doesn’t ever seem to coalesce.  And while you think that she’s going to be the great romance (because it was billed as a romance) for Lawson because Jessa has been out of the picture for almost half the damn book at this point, she morphs into this…other gray and shadowy entity.  Theresa is the relationship that never should have continued past “just dating.”  I think that’s why it didn’t bug me more that she didn’t seem solid.  She was an idea.  She was the easy comraderie that morphs into “why not?”  At first I was frustrated because Lawson’s description of her personality is directly contradicted by what she says and does once Jessa comes back into his life.  But by time I got to the end of the book, I could understand that it definitely WAS part of her character.  I still hate her for trying to control Lawson and for ditching him when things got rough (even though she was never really there to begin with).

I think, the whole story is more of a memoir of Lawson.  Events are glossed over and the timeline jumps frequently.  I feel like a lot of the details are missing and I got hazy recollections of what happened.  Rhys tries to work in some seriously heavy topics (drugs, suicide, etc)…but with how insubstantial the story is, it’s difficult.  One thing that bothered me was how lightly a suicide attempt was brushed off.  3 days of inpatient without any counseling and I’m better?  What?  No mention of follow-up counseling, no mention of medication, no mention of ANYTHING.  Just in and out and done and he’s all better.  That bugs me A LOT.  The supporting cast’s reaction to the attempt is pretty believable, but Lawson’s reaction is not.  Also, the implication that that is all it takes to get over it does a disservice to the people who suffer with depression and suicidal thoughts.  The drug use is handled much more realistically and tactfully, showing the slow spiral and eventual devolution of relationships (combined with paranoia, etc.)  But, once again, there’s no mention of any sort of treatment.  It’s just a thing that happens (a lot) and people keep going with life.

Overall, this story was easy to read and decently put together.  I would NOT classify it as a romance, however.  And there were obviously some things that I really took issue with inside the story.  In addition, I feel like the story could have used some fleshing out.  It was hard to get a feel for anything in the story…the telling felt almost mechanical in places while others it was “blurry” (for lack of a better word) and seemed to barely have come into focus.  Despite all that, I really do feel like this story was decent and recommend it to anybody who’s looking for contemporary fiction (with a terrible love triangle that gets a bit smudgy).  Grab your copy by clicking the link below