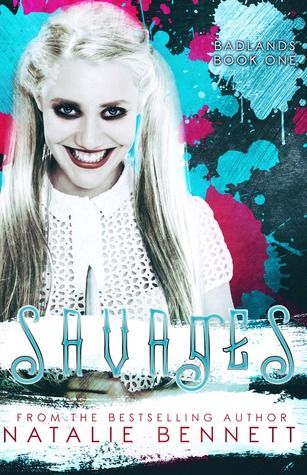 Calista
“I am the monster they created. I’m the whore they’re ashamed of.”

When life tried to break me I grabbed that b*tch by the throat and squeezed.
I thought I could overcome anything. I swore I could handle him, but after being forced to play at the Devil’s playground I ended up craving his touch.
One taste of his poison made my loyalties begin to waiver.

Romero
“I’m a living nightmare, I’m everything they fear.”

I’ve been called the Devil, deranged, and a savage. I lived by a code created by rebel souls. We were sinners and thieves that made no apologies for taking whatever the f*ck we wanted. Saving a girl in the woods was never part of my plans, but when I saw the crazy in her eyes I knew it was a match made in hell.

Now secrets are piling up, the bodies are rotting, and time is running out to finish what I started.

Forewarning, our story is more than a little f*cked up.

I am not going to put a long ‘trigger warning’ on this book. I will say that Savages is a VERY cautionary tale that has no regard for hard limits. Reader discretion IS highly advised. <–18+

Every now and then, I crave something to read that is a bit heavier and a bit darker than the stuff I normally read.  In fact, if the main characters don’t get their happily ever after, I’m okay with that.  I’m not sure what drove me to pick up this book.  It was NOT the cover.  I am pretty sure I was falling down the rabbit hole of “People who viewed this also viewed…” on Amazon.  However it came about, I did wind up reading this one.

Natalie Bennett’s Savages reaches Addison Cain levels of dark.  Delving deep into the world of religious cults, dystopian societies (or lack thereof), and the minds of the truly twisted, Bennett is not afraid of anything.  I’m pretty sure she’s on an FBI watchlist somewhere from researching this book.  That being said, if dark is your cup of tea…this one is definitely for you.

There is an amazing level of character and plot development that I rarely see in Indie authors.  While I like a dark romance, I love a book that has me scratching my head and unable to see around the next plot twist.  The story appears to be pretty straightforward right up till the very end…and at that point you are scrambling for book to just to try to figure out what is going on.  To the people who didn’t have instant access to book 2…I’m sorry that you were totured so.  However, I think the ending going down the way it did in this first novel shows a level of mastery that so many indie authors lack.  Bennett drags us kicking and screaming into a world where society has basically collapsed.  People have resorted to cannibalism and other forms of torture and horrific acts in order to survive.  While all the sex in between the MCs is consensual, Bennett does much more to make it a dark and twisted thing.

The devotion the MCs have toward each other is just the other side of terrifying.  I can’t even say that they love each other.  I’m not really sure they have a romance.  They have very compatible desires and physical needs and the fact that they both have SERIOUS issues stemming from past trauma gives them the ability to connect on a deeper-than-physical level.  HOWEVER…I’m just not sure that they’re capable of truly loving somebody.  They are crazy enough to stick it out till death, though.  Callie is a psychopath in a pretty package…and Rome is a sociopath in a prettier package. Together, they’re a force of reckoning.

The story is satisfying and filling in a way that much of the stuff Ive found recently is not.  Despite the fact that I rushed over Amazon to get book 2 downloaded, this story is very much a complete meal.  I eventually took a break when Book 2 was broken into the second part because I needed to digest this book.  I’m glad I did.  There were a lot of things going on in the story, and none of them were nice.  I’m still not ready to dive into the insanity and depravity that is The Savages, but I’m almost to the point where I can stomach it to find out what happens next.