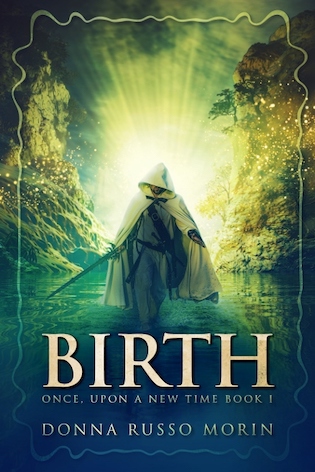 New worlds don’t appear. They are born from the labor of those who envision them.

Count Witon has grown weary of the constant war between the races. Together with his wife Belamay, and Persky – first of a rare Human / Elf breed – Witon plans to create a new society: a utopia for anyone who longs for peaceful coexistence.

They recruit pilgrims from every city and species; most to success, some to failure. Together, they set off to a small, yet promising island, found by chance in the middle of the churning ocean.

But the journey there is fraught with challenges, and none of them is as dire as the one they face once they reach their destination. Will they have the strength and determination to give Birth to this New Time?

Once, Upon A New Time is a medieval fantasy with a double-edged sword: one of blood, the other of lust.

THE FIRST STEP OF MANY

The screech-like cry of the seagulls rent the air.

“They laugh at me,” Witon remarked acerbically, shading his eyes with his hand as he followed the flight of the ocean fowl above the glittering sea.

“No, My Lord, they send ye a bon voyage,” said Persky, looking up at Witon, the adoration blatant in his slanted eyes.

The sun sparked off the ocean, the wind playfully nipping at it, making small, lively waves upon its surface. The pungent, briny scent of it invaded Witon’s nostrils and his adrenaline soared with the promise of the quest.

He stood at the very edge of the long dock, unable to move his gaze from the beautiful vessel bobbing gently upon low waves.

“She’s not big, sir, but she’s quite beautiful,” Persky said as if reading Witon’s mind.

Witon turned his dazzling smile to the small creature. Choosing Persky as his first mate was one of the easiest decisions Witon had ever made.

They made an interesting sight standing together; one fairly small, the other slightly more than six and three, but in each burned the same loyalty… to each other and the beliefs and dreams that bound them.

Witon turned his smile back to the ship his father’s legacy had helped to build. The sailing craft, a three-masted schooner about one hundred and twenty-five feet long, was constructed of mostly square timbers. The ship’s design served multiple purposes; to bring them to their destination, to return and guide the second ship onward, and, once there, to be dismantled and the wood used to erect temporary housing in their new world.

“A new world,” Witon intoned, as if he prayed.

“You have never looked at me so longingly.” The soft, seductive feminine voice broke Witon’s contemplation. With a hearty chuckle and a hitch in his breath at the recollection of last night’s perusal of her, he turned to see his Belamay approaching, resplendent in her form-fitting purple bliaut, the gold chain resting on her hips marking their sensual sway.

“My longing for you is always here.” He placed a hand upon his heart. Leaning down, he brushed his lips upon hers, his eyes never leaving her bright face, one he swore looked more beautiful than the day he had first seen it.

Where would I be without her?

Belamay reached up and pushed a stray strand of white hair from Witon’s face. He felt her gaze warm upon his cheeks. Pulling back, but only a smidge, she laughed with almost comic delight.

“Do I amuse you so?” Witon did his best to look brutish; smoothing any smile from his sun-drenched skin, forming a straight line with his full lips. A futile attempt.

“Your eyes are aglow like a boy’s, one ready to grab a sword for the first time,” Belamay chortled.

Her laughter died away and in her pitch-dark eyes, Witon saw what he felt, the heartbreak of leave-taking.

“It will not be long, I swear it to you,” Witon said as if reading her mind. “If the maps are correct, we shall reach land in just four days. As soon as we do, I shall send the ship back to lead yours.”

“If you worry so much, you cannot see to our work.” Witon entwined her arm in his and led her to the edge of the dock. “I need you to reassure the others, keep them from changing their minds. They will feel the same fear as you. You must keep them strong.”

Belamay commanded what they called the ship of love, for when the first vessel made land, they would follow, the families of those who charted the course, who dared go before all others, into the unknown. She would bring their loved ones and, with them, the new land would be full of the love required for a world to be born.

She shook her head with a smile and Witon knew she shook off her fears. She became, once more, that fiery, ferocious warrior he had met on the battlefield.

“I will keep myself, and them all, strong.” Belamay squeezed his arm.

In tune as always, their twin gazes danced out upon the sea, pulled out to the ocean’s horizon.

“Look, Bel, do ye see it?” His voice came as naught more than a whisper, a faint breeze.

Belamay strained her eyes to search the gently undulating water.

“Our future,” he said, gifting her with his dazzling smile. “I see our future free of hatred and bigotry, a peaceful and serene life, where we can raise dozens of children without constant worry, without losing them to endless battles and war.”

“D… dozens?” she croaked, shooting a sly look from the corner of her eyes.

Witon gave her hip a slight nudge with his.

Witon turned and raised the hand he held in his. With his gaze locked upon hers, he lifted the cuff of her glove, and, with the softness of a feather’s caress, brushed his lips on the underside of her wrist where the skin was thin and the blood rushed so close to the surface. “We will have as many children as you wish, my dear.”

He smiled as he watched her skin ripple with pleasure.

“Now who is the tease?” she said, her voice low and husky.

“My Lord, My Lord!” Persky ran toward them, calling loudly, waving his arms. “They’re coming!”

Witon’s eyes popped; he clutched the hands in his.

“They’re coming!” Witon whispered, his voice prayer-like once more. With a parting squeeze of his lover’s hands, he spun round to follow Persky.

Belamay smiled as she watched him hurry away. No longer the seductive rogue, but a boy again, Witon shimmered, brilliantly alive with the promise of what lay ahead. She quickened her own step. This historic moment would not happen without her.

Donna Russo Morin is an award-winning historical fiction author. Donna has dabbled as a model and actor, working on Showtime’s Brotherhood and Martin Scorsese’s The Departed. Branching out with her storytelling skills, Donna is now a screenwriter. A graduate of the University of Rhode Island, Donna lives on the south shore of Rhode Island close to the ocean she loves so very much. She is the proud mother of two sons, Devon and Dylan, her greatest works in progress.