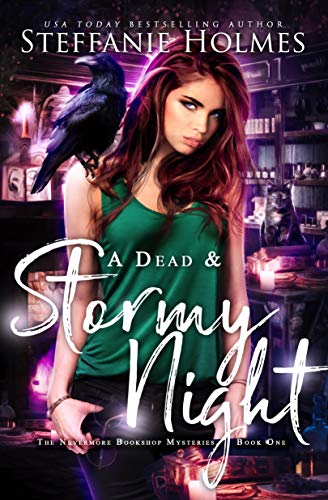 What do you get when you cross a cursed bookshop, three hot fictional men, and a punk rock heroine nursing a broken heart?

After being fired from her fashion internship in New York City, Mina Wilde decides it’s time to reevaluate her life. She returns to the quaint English village where she grew up to take a job at the local bookshop, hoping that being surrounded by great literature will help her heal from a devastating blow.

But Mina soon discovers her life is stranger than fiction – a mysterious curse on the bookshop brings fictional characters to life in lust-worthy bodies. Mina finds herself babysitting Poe’s raven, making hot dogs for Heathcliff, and getting IT help from James Moriarty, all while trying not to fall for the three broken men who should only exist within her imagination.

When Mina’s ex-best friend shows up dead with a knife in her back, she’s the chief suspect. She’ll have to solve the murder if she wants to clear her name. Will her fictional boyfriends be able to keep her out of prison?

The Nevermore Bookshop Mysteries are what you get when all your book boyfriends come to life. Join a brooding antihero, a master criminal, a cheeky raven, and a heroine with a big heart (and an even bigger book collection) in this brand new steamy reverse harem paranormal mystery series by USA Todaybestselling author Steffanie Holmes.

A Dead and Stormy Night by Steffanie Holmes is the beginning of a new series that really stands out from the crowd.  Mostly, because of the way it was written.  Gothic romances from the Victorian era (think Jane Eyre) are books that always draw me in.  Holmes has managed to take a modern setting and write it in the same manner…making this a truly unique book.  For some reason, things like this always get to me and this book is no exception.

I love to see Shakespeare modernized…as long as the speech is left alone.  In sort of a reverse modernization, Holmes keeps the style of writing pretty much classic Victorian Gothic while the setting and people are decidedly modern.  But she’s not content with just that.  Holmes then turns around and gives us a reverse harem of classic literature’s bad boys:  Heathcliff from Wuthering Heights, Moriarty from Sherlock Holmes, and randomly, the Raven from Poe(whose name is SO FREAKING AMAZING that I refuse to share it and ruin the surprise).

The entire story is a feast for bibliophiles, as it sneaks various famous quotes and book titles into the storyline, often without even acknowledging them.  Literary Easter eggs!  But even better, the story is actually very well written (something that’s becoming increasingly difficult to find in this sub-genre as it explodes).  It’s kind of a slow start, but that also seems to mimic the Victorian Gothics, so I just rolled with it.  Also, I will never EVER view the poetry of John Donne in the same light again.

The character development is exceptional.  There isn’t a lot of dev in regards to the FMC, but the attention to detail on the guys and the choice to make them into bad boys with big hearts…Also, the details regarding their appearances…makes this a series that I desperately need more of.  Holmes teases out little details about all the characters throughout the story, though, that makes it seem like there is a lot of growth when we’re really just reading a very long introduction.

Overall, I am anxiously awaiting February 22 when the next book comes out.  While the main mystery of this book is resolved, there are story arcs that will obviously continue throughout the series that are barely touched upon.  I hope the rest of the series continues to use the Victorian-style writing in the modern setting and that the characters continue to be interesting, as those are the 2 main things that are drawing me back.

Grab your copy at the link below!