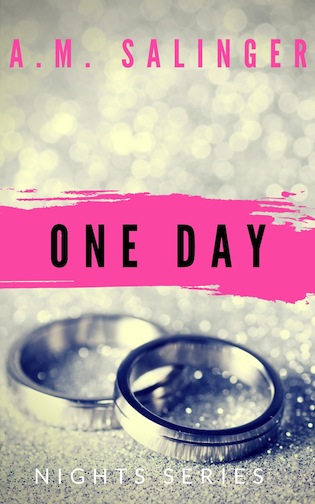 I will never tire of this man. Whatever he wants. Whenever he wants it. I will accept it all. All of him. Forever — Gabe

He taught me so much. How to love. How to laugh. How to fight and make up. And every day that I spend with him is another day I thank God for the gift He granted me when He gave him to me — Cam

With their wedding two months away, Cam Sorvino and Gabe Anderson receive an unexpected invitation from Gabe’s estranged parents to visit them in the US. But the trip doesn’t go as planned and Gabe leaves his family home with a bitter taste in his mouth, the memories of his past trauma fresh in his mind once more. Until Ethan asks him to join him on an incredible project, one with the potential to change Gabe and Cam’s lives forever.

With Ethan in charge of their secret bachelor party, Cam, Gabe, and their friends go on to enjoy the weekend of a lifetime, including one surprisingly hot and wicked night organized exclusively for them by the sexy bartender.

But as the countdown begins to their wedding, Cam can’t help worrying that Gabe is hiding something from him. Little does Cam know about the breathtaking surprises Gabe and Ethan have in store for him and Joe when they finally gather on the island where the wedding ceremony is to take place. And that’s not the only wonderful thing that unfolds in the beautiful surroundings of the tropical paradise.

Join Cam, Gabe, and all the couples of the Nights series in an epic finale that will have you crying, laughing, sighing, and cheering for all their happily-ever-afters.

Note from the author: this book is the final installment in Nights and cannot be read as a standalone. So, what are you waiting for? Get the entire series now and discover the hot, funny, sexy, wicked couples of Nights!

This is a novella length MF/MM romance with a collection of most splendid HEAs!

Cam Sorvino felt the man beside him stiffen when the flight attendant announced their imminent arrival into Chicago. He reached for Gabe Anderson’s left hand where Gabe gripped the armrest of his seat.

Gabe’s ice-blue eyes softened as he lowered his gaze to the beautiful, white gold and platinum band adorning his ring finger. “Yes.” He turned his hand over and entwined his fingers with Cam’s before lifting Cam’s hand and pressing a brief kiss to Cam’s knuckles. “I’m sorry, I’m just—nervous. I haven’t seen them in ten years.” He tugged his lower lip between his teeth in a gesture that Cam had come to adore and lowered his head on Cam’s shoulder, a heavy sigh shuddering out of him. “I was surprised they agreed to meet me.” He paused. “To meet you.”

Cam frowned faintly over his lover’s head as he looked out through the window of the first class cabin to the city growing rapidly below the fuselage of the plane.

It had been his idea for them to reach out to Gabe’s parents to invite them to their wedding. Since Cam was an orphan and wouldn’t have any family attending on his side, he hadn’t wanted Gabe to be in a similar position. He’d first suggested it over breakfast one morning a month ago.

“As long as our friends are there, I don’t really mind,” Gabe had said. “Besides, my parents pretty much disowned me the day I came out of the closet and told them about—,” he’d hesitated for a second and grimaced, “—about Andrew.”

Cam had clenched his jaw at the mention of Gabe’s former flame. Though he and Gabe were happy and committed to one another, it still irked Cam that Gabe’s first gay relationship had ended so disastrously, leaving him with emotional scars that had made it impossible for him to have sex for eight years.

When Gabe confessed to Cam about how Andrew had arranged for a group of five men to gang rape him on camera on the night of their first year anniversary, a night where Gabe had thought he and Andrew would finally consummate their relationship, Cam had wanted to find the bastard and beat the ever-living shit out of him.

That Andrew and his associates had gotten their just deserve and gone on to serve jail sentences didn’t take away from the fact that they had hurt and traumatized Gabe so deeply he hadn’t been able to bear another man touching him for nearly a decade.

It was thanks to Cam that Gabe had finally been able to defeat his demons and have his first ever gay sexual relation. That he was and always will be Gabe’s first man was something Cam treasured with a possessiveness that sometimes scared him.

Although Cam had overcome his trailer trash past and now lived a life he could never have dreamed of when he was a child, Gabe was the first person who had truly belonged to him, in every sense of the word. Yes, they had amazing friends, and that circle had grown to a pretty tight-knit group these past two years, but still, Gabe was his and his alone.

Cam’s frown deepened. And that’s something no one will ever take away from me.

The plane started its descent into Chicago O’Hare Airport. They cleared customs in record time, collected their luggage, and were soon headed for the exit. Cam sensed the tension winding through Gabe increase tenfold when a black limo pulled up smoothly at the curb in front of them as they came out of the building.

He glanced at Gabe’s stony expression, surprised. “Hmm. Is that for us?”

Gabe nodded curtly, a muscle jumping in his jawline. The chauffeur got out, greeted them with a polite smile, and ushered them into the back of the vehicle under the curious stares of passers-by.

Cam twisted on the luxurious leather seat and stared at Gabe while the chauffeur placed their cases in the trunk. “Does your family normally do limos?”

Gabe ran a hand through his hair, irritation darkening his face. “I told them we’d get a cab, but my father insisted on sending the car. Knowing him, this is purely for show.”

As the vehicle pulled out of the airport and merged onto the interstate heading north, Cam wondered what else he was going to discover about the man he was going to spend the rest of his life with. Gabe had been pretty tight-lipped whenever Cam had inquired after his estranged family in the past. All Cam knew was that Gabe’s father worked in banking and his mother used to be a realtor. And he had a younger sister who he’d also lost touch with ten years ago.

The limo rapidly ate away the miles to their destination and soon entered the picturesque North Shore community of Kenilworth, overlooking Lake Michigan. Cam’s heart sank as he studied the stunning, multi-million dollar properties visible behind the walls and hedges of the affluent neighborhood they were driving through.

The limo turned into a cul-de-sac, headed through a pair of imposing wrought-iron gates, and pulled into a circular driveway fronting a gorgeous red-bricked Georgian colonial mansion. One of the imposing oak double doors opened to reveal a man in uniform.

“You have a butler?” Cam said leadenly when the vehicle slowed to a smooth stop in front of the solemn figure standing under the portico.

Gabe sighed, turned to face Cam, and took his hands while the chauffeur got out and headed for the trunk. “Okay, before we go in there, I want to apologize.”

A bark of laughter escaped Cam. He wasn’t sure whether he was shocked or annoyed with Gabe for having kept this a secret from him. “What, for being stinking rich?”

Gabe shook his head, his expression full of remorse. “My family is wealthy, Cam. I’m not. I’m still the same man you healed that night two years ago. The same man who fell madly in love with you.” He leaned his forehead against Cam’s. “The same man who belongs to you, body, heart, and soul,” he murmured, pressing a sweet kiss to Cam’s lips. He pulled back and tightened his hold on Cam’s fingers. “No, I’m apologizing for whatever may go down in that house in the next couple of days.”

The back door of the limo opened.

“It is good to have you home, Mr. Anderson. Welcome, Mr. Sorvino,” the butler murmured respectfully.

Gabe tensed and let go of Cam’s hands. Cam followed Gabe’s uneasy gaze to the couple watching them coolly from the doorway of the mansion, his lover’s heartfelt confession and warning still ringing in his ears.

Ava Marie Salinger is the pen name of an Amazon bestselling author who has always wanted to write scorching hot contemporary and erotic romance. In 2018, she finally decided to venture to the steamy side. NIGHTS is the first of several sizzling series featuring sweet, sexy men and women with dark pasts and a whole lot of love to give to the ones brave enough to fight for their hearts. When she’s not dreaming up hotties to write about, you’ll find Ava creating kickass music playlists to write to, spying on the wildlife in her garden, drooling over gadgets, and eating Chinese.
Want to be the first to know about Ava’s new releases and get access to exclusive content, sneak previews, sales, and giveaways ? Then sign up to her Reader Group here and join her VIP Facebook Fan Group here.