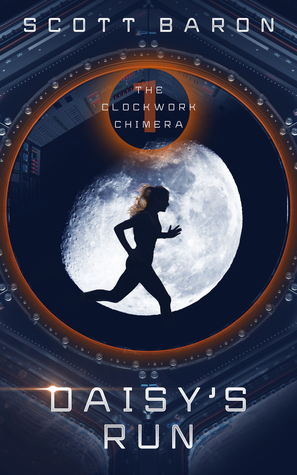 Life in deep space could be a drag sometimes, but Daisy supposed things could have been worse. They were still alive, after all, which was always a plus in her book. Now if only she could figure out who, or what, was endangering her return home, things would be just peachy.

It had been one hell of a way to start the day––being rudely snapped from a deep cryo-sleep, and in the middle of a ship-wide crisis to boot––but Daisy was pleased to note that the ship had not decompressed, the crew hadn’t been blasted into space, and, most importantly, they hadn’t simply blown up. At least not yet. So, they had that going for them, but being stuck on a damaged ship in the inky depths of space as it limped toward Earth was not exactly the relaxing trip home she’d imagined.

With the powerful AI supercomputer guiding the craft beginning to show some disconcerting quirks of its own, and its unsettling cyborg assistant nosing into her affairs, Daisy’s unease was rapidly growing. Add to the mix a crew of mechanically-enhanced humans, any one of whom she suspected might not be what they seemed, and Daisy found herself with a sense of pending dread tickling the periphery of her mind.

Something was very much not right––she could feel it in her bones. The tricky part now was going to be figuring out what the threat was, before it could manifest from a mere sinking feeling in her gut into a potentially deadly reality.

“Should we wake them? I mean, the ship is on fire, after all.”

Barry didn’t seem stressed. In fact, his voice rarely showed any extremes of emotion at all, though that was to be expected of a cyborg.

“It is a bit early, but yes, given the problems I am experiencing with my internal sensors and fire suppression systems, I think that would be prudent,” the disembodied voice of Malorie, the ship’s artificial intelligence system, replied. “Though I would like you on hand, just in case there are any issues cycling the crew out of cryo-sleep so early, and on such short notice.”

The handsome flesh-and-metal man with sandy-blond hair rose from his seat in the control room and stepped into the double airlock leading to the central passageway network. Starboard Peripheral Corridor One would have been the faster route, but after the impact, with the possibility of undetected depressurization in any of the damaged and offline pod sections or one of the unmonitored inter-compartmental conduit routing spaces, he’d just have to take the long way. The inconvenience, he reasoned, was certainly preferable to being unceremoniously blasted into space.

The Váli was a sturdy ship, and she had only been nudged slightly off course by the collision. There was time to set things right, but sooner was far better than later. At the speed and distance they were traveling, “slightly” could easily become “a lot” quickly.

Normally Mal would simply right the course herself, diverting a fraction of her attention toward adjusting the maneuvering thrusters to gently ease them back on target. In the event of a fire of any significance, however, protocol required her to wake the crew of the Váli.

The ship’s unusual name had been taken from old Norse mythology, given to it by a cybernetically-enhanced engineer with a fondness for ancient texts. Váli, the son of Odin, brother of Thor. A god prophesied to survive Ragnarok, the end of times.

She was a fast ship, no doubt, and extremely nimble, when not laden with additional research, living, and lab pods locked to her support frame for such a long voyage. That bulk-saving performance, however, came at a price. The multiple layers of outer shielding found on larger, sturdier vessels—the kind that would have prevented such a minor impact from damaging them in the first place—were sorely lacking, and so it passed that the ship had succumbed quite spectacularly to what would have been an otherwise minor incident.

A native Californian, Scott Baron was born in Hollywood, which he claims may be the reason for his off-kilter sense of humor. Before taking up residence in Venice Beach, he spent a few years studying abroad before settling into the film and television industry, where he has worked off and on for some time. Scott not only writes, but is also involved in indie film and theater both in the U.S. and abroad.