Finn Conleth leads his team of enforcer dragon shifters with an iron fist and a cold heart. Every dragon seeks his destined mate, but the process to turn the woman he once thought was his killed her and devastated him. He will never risk his heart again. His team is his family now. When his body eventually gives out, he’ll leave, living his last days alone.

Delaney Hamilton moved across the country to escape the freak fires that plague her. But when another suspicious fire erupts and rapidly escalates around her, her hopes for a new life go up in smoke. She has no choice but to turn to the mysterious men who come to her aid.

Finn knows the fire is dragon-caused, which puts Delaney’s problems directly in his jurisdiction. No matter how her wounded grey eyes call to every part of him, he refuses to risk her life in the mating process.

Until another dragon threatens to claim Delaney for his own, and Finn has to sacrifice everything to keep her alive…

Plumes of smoke seeped out of the door she’d left open, but the flames were still hiding inside.

Oh God, I have to fix this.

Delaney had thought she’d be safe here. She’d thought the fires that plagued her in Vermont wouldn’t follow her across the country.

She ran to the water faucet that stuck out of the ground about twenty feet from the barn. A long hose already attached lay coiled beside it. With a twist, she turned the water on full force and dragged the hose toward the barn.

That reason, more than her own safety, drove her actions.

Carefully, she moved closer to the building. Her aching eyes and fuzzy vision didn’t help, but she kept going. She inched inside until she glimpsed flame, then she aimed her hose at the spot and sprayed, using her thumb to focus the water. The fire appeared to laugh at her pitiful effort like a crazed, caged animal. Flames receded in fizzling, smoldering protest before lunging for her with renewed vigor.

I’m not even making a dent.

Delaney stepped forward, not giving up, dousing more of the blaze.

A snap of sound was the only warning she had before the beams above her crumbled. With a scream, Delaney jumped, feet scrambling as she tripped and fell backwards. Luckily the beam didn’t land on her, but it lay so close, heat singed her skin. Grabbing the hose, she crawled back to her feet and turned the spray on the beam.

“What the hell do you think you’re doing?” a deep male voice thundered in her ear a second before a strong arm banded around her waist.

Delaney found herself hoisted over a shoulder, the air punching from her lungs with a whoosh as her middle connected with a broad shoulder, as she was bodily carried from the burning structure.

She also didn’t think to let go of the hose.

Her rescuer stumbled over the line and jerked to a halt.

“Damn,” the same deep voice swore and he yanked the hose from her hands.

Realization sank in that she’d been dousing the firefighter who’d “rescued” her, and a completely inappropriate giggle escaped her.

He took off again, not letting her go, jostling her none too gently as he ran across the gravel drive to plonk her on a boulder beside the main winery building. Delaney lifted her gaze up, way up, over his green flame-resistant pants, yellow long-sleeved shirt, and white helmet. A firefighter, but not any kind she’d dealt with before, not based on the clothing. He pinned her to the rock she sat on with the bluest eyes she’d ever seen.

Anger and frustration pulled his brows down in an intimidating glower. “Are you hurt?” he asked. Yelled more like, his voice a harsh growl.

Delaney blinked at him again, shock taking over and slowing her brain way down—like molasses in the winter.

When she didn’t answer, his severe expression softened. “Are you hurt?” he repeated, no less urgent, but gentler.

Pull yourself together. Delaney shook her head.

“Is anyone else in there?”

“No.” At least, she assumed the cat she’d saved was the only creature in there. “It’s for wine. State of the art with temperature control.” No way should fires be happening in the building.

He nodded. “I’ve got this now. Don’t go back in there. Wait here for the paramedics.” He straightened and anything soft about him disappeared behind granite determination.

This guy had it.

Relief surged through her followed by immediate the prick of tears that had nothing to do with the smoke.

Why does this keep happening to me? 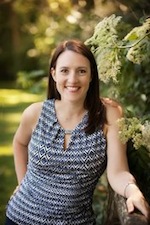 Award-winning paranormal romance author, Abigail Owen, grew up consuming books and exploring the world through her writing. She attempted to find a practical career related to her favorite pastime by earning a degree in English Rhetoric (Technical Writing). However, she swiftly discovered that writing without imagination is not nearly as fun as writing with it.

For the latest news and exclusive excerpts, sign up for her newsletter here: http://eepurl.com/Lw2XH