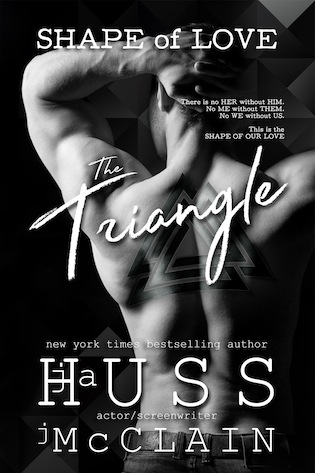 This is how you say our names.

Danger is our drug of choice, the triangle our addiction.

Alec. Golden boy with diamonds in his eyes.

Christine. Partner in crime and owner of my heart.

They know what they want.

Danny. Unsure of everything they’re offering.

But if she needs me, I come.

So when he called, I went. It’s just that simple.

Until all those memories come rushing back with all the things we left behind.

I only know three things.

There is no her without him.

No me without them.

No we without us.

We are Alec, Christine, and Danny.

And this is the shape of our love. Danny folds his arms across his chest. Defiant.

But Alec is already pushing me through the open apartment door. “Don’t worry. He’ll follow. It’s his fokken apartment, isn’t it?”

My eyes are still locked with Danny’s when I disappear inside.

Alec kicks the door closed, pushes me up against the wall, places both hands on my cheeks, and kisses me on the mouth.

I sink into him.

The door slams open, hitting the wall so hard I know there’s a hole in the sheetrock. “Get your fuckin’ hands off her,” Danny says, pulling me away.

I spin into him. Bounce against the hard muscles of his chest. And an instant later his arms are wrapped around me, replacing the heat of Alec with the heat of him.

Sinking is something I could get used to. Because I do it again.

“Oh, I’ve got ideas,” Danny says. “I’ve lots of ideas. And all of them involve me cracking that pretty face of yours into pieces.”

“Sorry, bru. But she doesn’t belong to you.” He pauses, his eyes focused on Danny. And without dropping that challenging stare he says, “Tell him, Christine. Tell him why we’re here.”

Shit. Why are we here? Did I miss something? Are there still gaps in my memory?

“Why don’t you ask her what she wants for once? Eh? I mean, I get it.” He takes another step closer. I’m in the middle now. Alec in front and Danny behind me. I can feel the heat of both men and they are on fire. “You had her first. Your claim is older. But you let her get away, Danny. You let her walk out and face the cold, hard world alone. And I never did. That should count for something.” He places his hand back on my cheek. Lets his gaze fall to me—“Right, luv?”—then rise back up to Danny.

Danny holds me tighter, the zippers of his leather jacket cold and biting against my back where my t-shirt has ridden up. God. Yes. “It counts,” I say, betraying Danny in the same moment I pledge allegiance to Alec.

And then I turn to face Danny.

He wants to be angry. He wants to glare at Alec. Probably kick his ass. But that turn changes everything. Because he forgets about Alec and only sees me.

I slowly rise up on my tiptoes. My hands slip underneath his jacket and slide along the cut muscles of his waist. He closes his eyes for half a moment, sighing inside as we fall into each other. My lips gently caressing as my tongue probes against his hard mouth.