Rebecca Trogner’s Secrets in Our Scars was unexpectedly good. And not because of the romance. To be honest, the romance felt off and kind of stalker creepy, but the romance was really just a vehicle to address ptsd, anxiety, cutting, and sexual assault. So there is a very real trigger warning there.

The twist was very unexpected, and its contribution to the ending was profound. The book was well – written, but even at the end, I still didn’t care about Roy. I want lots more Proctor, though. I love a good tortured hero… and Proctor’s story is one I definitely want to read. Overall, I’d give this book 4.5 stars. I just don’t care about the hero and am kind of squicked out by him, but Trogner’s careful and meticulous handling of Daisy saves the book from being average.

A sexy romance. A twisted mystery. One mistake can change everything.

On a sweltering summer day, Daisy Aldridge knocks on the wrong door. Yanked inside. Trapped and pressed against her only means of escape she spirals into a panic. Years ago she suffered an assault. Alone and afraid, she kept it hidden and dealt with the emotional aftermath in her own way.

But this time she’s not alone. She’s helped by a man who seems vaguely familiar. Roy Blackwood is massive, muscled, powerful, and controlled. She tells herself she wants nothing to do with him.

Roy sees through her resistance. He wants her. Needs her. He promises to find the identity of her birth parents and unveil the person who leaves her anonymous gifts. And most important of all, earn the love and trust of Daisy Aldridge.. 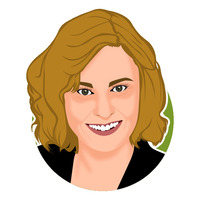 Rebecca Trogner started writing her first novel after watching True Blood. Of course it was about vampires and thus The Last Keepers Daughter was born. The next, The Last Guardian Rises, continued the series. Her latest book, Secrets In Our Scars, is a contemporary romance and a lot spicier. She’s working on her fourth book with the help of her rescued animal pets.