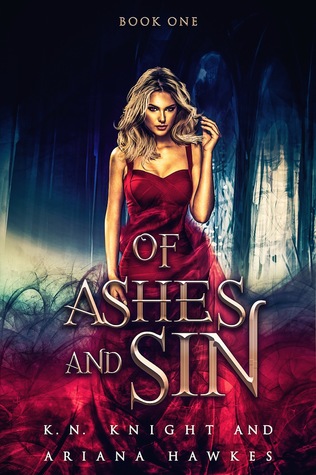 A world without fire. Three sizzling shifters. One flame-haired hustler. An elemental bond that could bring light back to the world, or be the end of them…

The last Phoenix has perished in a huge blaze of flames, extinguishing fire from the earth. Ranger Mason is a nineteen-year-old shifter whose spirit animal has not yet been fixed. An orphan, hustler and part-time exorcist, she scrapes a living in a dangerous, burned-out world, with no idea of the unique power she holds. That is, until a sexy tiger, bear and eagle shifter trio bursts into her life, convinced she’s the key to recreating fire.

What none of them realizes is that she’s no fire elemental, but something even more rare and special…something that will create the strongest possible bond between them, but also threaten to destroy her. Ranger is the only one capable of uniting a dragon with the three water, earth and air elementals, but as the love bond between the four of them ignites, the guys are unwilling to risk her safety—even if it means restoring balance to the world.

But Rael, Zain and Oran are not the only ones who have discovered Ranger’s gifts, and suddenly the decision is taken out of their hands. Will she be able to create peace between her three mates, who have vowed to do anything to protect her, and a dragon intent on keeping her in his cave as his personal, flame-haired treasure?

The guys went into the pool again after breakfast, their bronzed bodies glistening in the sunlight, but I kept my clothes on and took a walk around the perimeter of the area instead. I was edgy in a way I couldn’t explain. Yes, I was restless, but it wasn’t just that.

I looked over at the three of them. Oran was swimming, his muscular back and tight buns showing on the surface of the water, while Zain and Rael were stretched out naked, two perfect specimens of manhood. I laughed hollowly. This would be any woman’s ultimate fantasy. Am I crazy not to just relax and enjoy it while I can? But something kept tugging at the edges of my mind. Zain called to me and tried to get me to join them, but I waved at him and kept walking, completing one circuit after another.

“Ranger! Are you okay? You’re making me dizzy with all that pacing,” Rael called as I passed close by him.

I came to a stop. “What if—what if something goes wrong?” I said. To my dismay, I was close to tears.

“Come and sit down,” Zain said.

With a sigh, I went over to a rock that was close to all of them and sat down on it, cross-legged. “What if this big plan ends in disaster and ruins everything?”

“Ranger, listen to me,” Zain continued. “We’ll never let anything bad happen to you. Each of us would fight to the death before we’d let anyone or anything hurt you. You’ve got to understand that.”

“I’m sure we could fight one off. But what if there are lots of them?” My mind spiraled out of control as it tended to when I was anxious. What if someone was injured or killed? The thought of losing any one of them was like a punch in the guts. They were my mates. Mine. And then I started to breathe fast. I knew what the problem was, but I’d been trying not to admit it to myself: I was falling for the guys, all three of them. I had been since the beginning, and it scared the hell out of me. Accepting they were my mates, that we’d all look out for each other, and they’d all have sex with me was one thing. But realizing I had feelings for them was another. It made me vulnerable, and I didn’t like that one bit.

“Ranger? What is it?” The unaccustomed softness in Oran’s voice jolted me back to the present, and I realized he’d been calling my name for a while.

“I like you,” I blurted out. “I mean, I more than like you. I’m falling for you, all three of you.” And then I covered my face with both hands because I was so embarrassed.

Slowly, gently, my hands were tugged away from my face, and I opened my eyes to see all three of them had gathered in front of me and were looking at me intently.

K. N. Knight has been writing fantasy novels for the last twenty years and collecting katana swords for even longer than that. She has 35 bestselling novels under her belt and more than twice that number of swords. Now writing under her real name for the first time, she’s turned to reverse harem, because who wouldn’t. She’s known as Cayenne or even Cayenne Pepper in some circles and she lives with her husband and three boys in Seattle. When she’s not causing or fixing trouble, she enjoys shower sonatas, velvet cupcakes and drawing anime portraits. Sign up for updates at http://eepurl.com/dz63d1.

USA Today bestselling author Ariana Hawkes writes spicy romantic stories with lovable characters, plenty of suspense, and a whole lot of laughs. She told her first story at the age of four, and has been writing ever since, for both work and pleasure. A horse-lover, an ex-financial writer, a former competitive runner, and a Minoan civilization aficionado, she graduated in English and Latin Literature from Oxford University and nowadays lives in Massachusetts with her man and two huskies.