I fell into this book.  Immediately, Nicole Harkin immerses you into her life and that of her family.  This book is a hard look at herself and her family.  Harkin’s ability to look back on herself objectively (or even harshly) is to be commended.  She doesn’t take the opportunity to make herself look better, and maybe even is a bit harsh on herself.  But despite that, or maybe because of it, I found myself in tears mulitple times throughout.  The girlfriend mentioned in the blurb is just the tip of everything, and Harkin does a great job looking back to her childhood while discussing these major later-life events.  The flashbacks segue beautifully into more current events.  While there is nothing life-altering and show-stopping about this family, there is much to be related to and some just unfathomable unless you have really been there.

This is a memoir, but the story is told with such richness that it flows like a novel.  There is a depth to the family, and you know that even with all the details, there are hidden currents.  I really really recommend this book.  It’ll take you on a rollercoaster ride of emotions, but the laid-bare soul of the family makes it all worth it.  In a time where I’m flinging books aside left and right, this memoir caught and held my attention, to the point where I read it in a single sitting.

We only learned about our father’s girlfriend after he became deathly ill and lay in a coma 120 miles from our home.

Overhearing the nurse tell Linda–since I was nine I had called my mom by her first name–about the girlfriend who came in almost every day to visit him when we weren’t there confirmed that the last moment of normal had passed us by without our realizing it. Up to then our family had unhappily coexisted with Dad flying jumbo jets to Asia while we lived in Montana. We finally came together to see Dad through his illness, but he was once again absent from a major family event–unable to join us from his comatose state. This is the moment when our normal existence tilted.

Dad recovered, but the marriage ailed, as did Linda, with cancer. Our family began to move down an entirely different path with silver linings we wouldn’t see for many years.
In this candid and compassionate memoir which recently won a Gold Award in The Wishing Shelf Book Award, Nicole Harkin describes with an Impressionist’s fine eye the evolution of a family that is quirky, independent, uniquely supportive, peculiarly loving and, most of all, marvelously human. 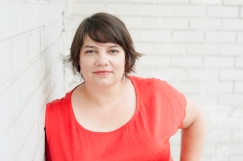 Nicole Harkin currently resides in Washington, DC with her husband and two small children. She works as a writer and family photographer. As a Fulbright Scholar during law school, Nicole lived in Berlin, Germany where she studied German environmentalism. Her work can be found in Thought Collection and you are here: The Journal of Creative Geography. She is currently working on mystery set in Berlin. Her photography can be seen at www.nicoleharkin.com.