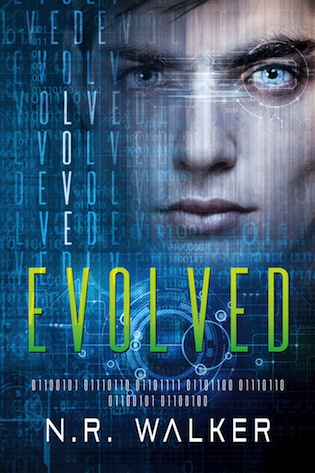 In 2068, androids are an integrated part of human life. Big Brother no longer just watches from the shadows. It’s in every household.

Lloyd Salter has OCD issues with noise, mess, and he’s uncomfortable with human interaction. When his ex claimed the only thing perfect enough to live up to his standards was an android, Lloyd dismissed it. But two years later, after much self-assessment, Lloyd thinks he may have been right.

SATinc is the largest manufacturer of androids in Australia, including the Fully Compatible Units known as an A-Class 10. Their latest design is the Synthetic Human Android UNit, otherwise known as SHAUN.

Shaun is compatible with Lloyd’s every need; the perfect fit on an intellectual and physical basis. But Lloyd soon realises Shaun’s not like other A-Class androids. He learns. He adapts. Sure that SATinc is aware Shaun functions outside of his programmed parameters, Lloyd must find a way to keep Shaun safe.

By the time my intercom sounded at nine fifteen the next morning, the butterflies in my belly felt more like stomping elephants. I buzzed the delivery team through and waited for the elevator to ping down the hall.

Breathe, Lloyd, I reminded myself.

My apartment was a spacious two-bedroom luxury unit on the top floor of the complex. Polished concrete floors, high ceilings, a bookcase as one entire wall, and floor-to-ceiling windows on the north-east facing wall. I liked the clean lines, minimalistic furniture. Well, I didn’t just like it. I needed it. Clutter and closed spaces made me anxious. My ex-boyfriend had found my apartment cold and clinical, but I found the whites and greys soothing, peaceful. Then again, he’d found a lot of things about me clinical…

The knock on my door startled me, even though I’d been expecting it. I opened it to find two men and a rather large crate. The first man smiled. He was wearing grey suit pants and a navy sweater. He showed me his ID. “Mr Salter, my name is Myles Dewegger. We have a special delivery.”

“Yes, yes, please come in,” I said, standing aside in invitation.

The second man wheeled through the crate. He was dressed all in black with a military style haircut, and he looked as though he belonged in a SWAT team. He was a rather large man, with bulging muscles and perfect skin, and I had to study him for a second. No, he was human.

“Nice place,” Myles said, looking around the large, open living room. “Are we all right to do this here?”

I closed the door and took a breath to steady myself. I wasn’t accustomed to having strange people in my house. “Yes, of course.” I followed him and stood next to the couch. “I thought Mr Kingsley might have attended the delivery. I assumed incorrectly, it seems.”

“Sasha’s a busy man,” Myles said with a smile. “Though if you’d prefer, I can call him and you can speak to him.”

“No, it’s fine,” I said. I was now staring at the crate. Oh boy. It was well over six feet tall, three feet wide. Shaun was inside. He was right there. I swallowed hard.

Myles read me. “Let’s introduce you, shall we?”

Myles and his helper, whose name I didn’t know, undid the crate and removed the front panel. My heart almost stopped. Inside, Shaun stood, packaged-in perfectly so as not to be damaged in any way. He was dressed in a dinner suit. A charming navy piece with a light blue shirt underneath his blazer, top button undone. His black hair was exactly as I’d ordered; short sides, longer on top, professional. His skin was warm ivory with a subtle hint of blush on his cheeks; his lips were pink and a perfect cupid’s bow. His eyes were closed, his lashes long.

He took my breath away.

The big delivery guy stepped in and unstrapped Shaun, then lifted him out. Right, that explained the need for muscle. Then he quickly wheeled the crate back to the front door, making the room neat again, leaving Shaun standing perfectly still in my living room.

Myles glanced at me. “Everything look okay?”

I nodded and had to focus on speaking so I could make actual sound. “So far, yes.”

Myles smiled as he took out a small hand-held screen I recognised from the SATinc office. It was a control panel. He tapped on both screens, I entered in a personal code, and Shaun was officially added to my Wi-Fi.

It was becoming so very real.

Myles seemed completely unfazed and oblivious to the fact that I was in the middle of a monumental life event. He went on a spiel of specifications and diagnostics, developmental robotics, neural networks, artificial consciousness, proprioceptive sensors, and spatial cognizance, but all I could do was stare at Shaun.

Myles stopped speaking when he realised I wasn’t paying attention, and his pause made me look at him instead. He continued, “I’ll activate him, then we’ll require him to study your face for a few seconds. He has facial recognition, so once he recognises you as his custodian, he’ll be able to identify you anywhere.”

“So if you’re out in public and you become separated, he will be able to find you.”

For the strangest reason, I found that comforting.

“And your voice. He’ll recognise that anywhere.”

I smiled at Shaun, though he still had his eyes closed.

“Are you ready?” Myles asked.

Myles held the small black screen toward me. He entered in a code and spoke clear and loud. “Please re-enter in your Wi-Fi code,” he said, averting his eyes while I entered my security code for Shaun’s wireless access. Then Myles added something else, and watching Shaun, he said, “Activate.”

They were the exact shade of blue I’d asked for. But he just stared blankly.

Myles entered in more codes, then spoke to me. “Please stand in front of him until I tell you to move.”

I did as I was instructed. Shaun was approximately an inch shorter than me, and he was even better close up. Being this close to him sent a curl of anticipation through me.

I could hear Myles tapping on the screen and then Shaun’s eyes focused on me. He was scanning my face, and then he looked down to my feet and up my body. It set my blood on fire.

Then Myles handed me the small screen and said, “Please read this out loud to him.”

I let out a breath and looked Shaun right in the eye. “My name is Lloyd Salter. I am your custodian, and this is your home.”

Myles took the control again and clicked on the screen a few more times, and something in Shaun changed. I saw it, the very moment it happened.

His gaze fell on me. “Hello, Lloyd,” Shaun said. His voice was a deep baritone, with a tenor that curled in my belly.

“Hello Shaun,” I replied. My voice was barely a whisper.

And then, throwing my world completely off its axis, he smiled. Not a perfect smile, but slightly lopsided in a very human way. If a simple smile could complete my existence, it was done. He was stunningly perfect.

“It is very nice to meet you,” Shaun said.

“Likewise,” I replied. I couldn’t stop staring at his eyes, and I swore the corner of Shaun’s lip twitched in an almost smile.

Myles grinned. “It’s amazing, isn’t it? How real they are?”

I nodded, staring back at Shaun. So very real.

“As I was saying before, he has the spatial awareness and object manipulation skills of a surgeon. He can lift heavy objects with ease, but he can also hold the finest, most delicate glass object with precision. He has social intelligence; he can recognise and interpret, process and simulate human affects and empathy. He is, without doubt, the most advanced A-Class synthetic android in the world.”

Shaun tilted his head a little while he studied me, and I stared right back at him. So remarkable.

“He’s been uploaded with extensive knowledge of all requested data,” Myles said, holding the screen out for me to see. I glanced at it but couldn’t take my eyes off Shaun for long. Myles continued anyway. “Literary histories, world current affairs, everything you asked for has been preloaded, but he can access any information you require. If it’s on the web, he can find it, and he can discuss, converse, debate whatever you want.”

“Now, as for the personal companion aspect,” Myles went on. Personal companion aspect was synthetic speak for sex. “All lubricants must be silicone based, not oil based, though I’m sure you’re aware. He can self-clean but he might like it if you help him.” I looked at Myles and he winked. “Yes, he has likes and dislikes. Though he’s been pre-dispositioned to your psych evaluation so there are no conflicts. He enjoys conversation, attention, praise…, touch. Sex.”

My heart rate took off.