Loren Mackenzie has overcome many obstacles in her life to be an elite professional cyclist in the Women’s World Tour in Europe. Known as the Ice Queen of the peloton, she rarely shows emotion in the heat of competition; inspiring her team with quiet strength and determination. But her cool confidence masks a dark past filled with horrors.

A change in management of Loren’s cycling team brings her face to face with a life she thought she left behind, adding to the pressures of competition. When a chance meeting with an A-list celebrity quickly develops into a whirlwind romance, the cameras of the tabloid-media focus on Loren, revealing the cracks in her facade.

The affair also exposes a menacing rival, threatening not only her chances in the World Championship but her life. When love and obsession collide, Loren stands in the center of a storm.

Can she find the courage to defeat her inner demons, or will her fear and shame consume her?

Coming soon – book 2: In Darkness, There Is Still Light 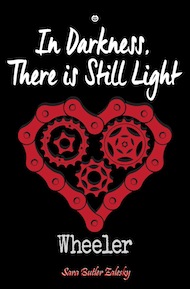 Sneak a peek at Chapter 1:

Atherton Leaves Her! Has the Actor’s Whirlwind Romance with the Pro Cyclist run its Course?

“Yes, Charlotte, he left me. In the airport, to fly back to California.”

Loren Mackenzie knew the headline in The Sun was an exaggeration, but the World Champion time trialist still felt the sting. As her pro cycling season draws to a close, Loren looks forward to taking a break from training and a reuniting with her boyfriend, Graham Atherton. When rumors and innuendo begin to swirl around them, secrets they have kept from each other shake their relationship to its foundation.

Echoes from the past ripple into the present, giving Loren a bittersweet reunion with a love she thought was lost. But, reliving the fractured memories of her childhood has left her afraid to dig deeper; lest the monsters that dwell in the dark corners of her mind drag her down again.

Meanwhile, obsession and greed churn into a storm on the horizon, threatening Loren and those closest to her. When the tempest hits and the dust finally settles, what is uncovered tilts the axis of her world.

The following is the first chapter of In Darkness, There is Light.

Loren Mackenzie let out a sigh, her eyes following the blinking lights of a jetliner as it disappeared into the distance over Kennedy International Airport. He’s just going back to work in California and I’m going home, to England. She let out an even longer sigh. Just two more races and I get to take a real break. How perfect would it be to just go lie on a beach somewhere with him.

Her gaze refocused on the reflection of a man approaching her in the window; his long, confident stride and athletic form quickened her pulse. She turned to face him, but her smile dissolved into a hard frown when he was stopped by a group of fawning teenagers, begging for autographs and selfies with him.

Yep, I had to fall in love with an A-list actor. As Graham Atherton separated himself from the group to continue toward her, Loren forced a smile, but it didn’t stick as he stopped again to become engrossed in his mobile. He looked up from the screen to continue on his way.

“Sorry about that, love,” he said to her. “Just a text from Ron. He said he’ll ring you when he gets into London to discuss setting up a meeting. Is that alright with you?”

She squinted an eye. “So I have people now?”

“I do come as somewhat of a package deal. All that, you know.” He thumbed at the disbursing crowd behind him. “And Ron’s a bit more than just my agent,” he said. “He’s my best mate and I trust him.”

“That’s nice of him to offer.” She turned back to the window as Graham came up behind and wrapped his arms around her.

“It’s just, this is the longest we’ve been physically together, and I don’t want it to end.” Her shoulders drooped. “I’m sorry I’m whining. I’m just tired.”

“No, darling, you’re not just tired,” he murmured. “You’ve been completely shat on.” He kissed her neck then tightened his arms around her. “You won the time trial Championship in Richmond, but you had to put up with all the nonsense from the press. And then losing the road race, which even that BBC reporter, Theo Arnold agrees was not your fault.” Graham came around to face her with pinched brows.

“But if that weren’t enough, you had to deal with me throwing your past in your face.” He cupped her cheek. “I still feel awful for that, and I want to help you, but I have no idea how.” Loren kissed him, then put her arms around his waist and held him close.

“I just want this, and more of it when I see you again.” He gave her a squeeze then drew away to glance around them. “Graham?”

“Grab your bag and come with me.” He bent to pick up their carry-ons, then led her to a private seating area, far away from prying ears and eyes. He took a seat on the small sofa across from her and held her hand with both of his.

“Darling, I know how hard it was for you and your aunt to talk about what happened to your mother and sister, and I’m awfully proud of you for doing that,” Graham said and glanced down at their clasped hands. “I also know Maggie gave you all of the photos and documents she found in the attic, and you have the file my father’s man put together.” He grimaced. “I want to ask that you don’t look through all that again by yourself.”

“Is that all?” she chuckled softly. “Here I thought you wanted to have a quickie or something.” His stare was somewhere between being shocked and wanting to laugh; his laugh won.

“I love you.” But his mirth it died out as his bright blue eyes studied her. “I have a present for you, and I wanted to save this for your birthday, but it’s burning a hole in my pocket.” He removed a small red velvet box from his jacket and her jaw dropped.

“What are you doing?” she whispered.

He leaned in closer, smirking. “I’m not asking; I’m giving. That’s all.” Her hands shook as she took the box and opened it. Nestled inside was a platinum ring of two clasped hands holding a red stone shaped like a heart, capped with a crown.

“It’s a Claddagh. I’ve always wanted one,” she said, smiling at him. “What’s the stone?”

“It’s a garnet,” he replied. Taking it out of the box, he slipped it on her left ring finger, the hands facing outward. Graham held her gaze as tightly as her hand. “With this crown, I pledge to you my loyalty. With these hands, I offer you my service, and with this heart, I give you mine.”

Loren couldn’t speak as her brain reset. “I don’t know what to say.”

“You don’t have to say anything, love. The stunned look on your face says it all,” he chuckled, but her eyes welled up.

“I didn’t want to cry in public, dammit,” she hiccupped, covering her mouth. He pulled her to sit on his lap, brushing her tears from her cheeks, but Loren frowned at him. “You had this with you the whole time we were together, and you’re just giving it to me now?”

“Well, yes and no,” he countered. “It belonged to my great-grandmother, so I’ve had it for a while, but it needed to be resized. It’s a complicated process, you know.” She kissed him then moved off his lap to the sofa but kept her legs draped over one of his.

“It’s beautiful. Thank you.” She settled her head on his shoulder, breathing in his scent and grazing her lips against the scruff on his jaw. “I don’t want you to go,” she whispered.

“I don’t want to either, but we both have jobs to do.” Graham held her tighter. “I’ll be home before you can miss me.”

She squeezed her eyes closed to hold back the tears. I miss you already.

He cleared his throat. “Loren, about the file﹘.”

“Who am I going to talk to, other than you or Maggie?”

“You can’t talk to Cece about it?”

She shook her head. “How can I talk to her about something I’ve never told her?”

Loren sighed. “I need to talk about all of this with my brother, my real brother,” she replied. “I need to find him.” Graham moved back to see her, his mouth curled down.

“I know I have no right to ask this of you, but will you wait until I come home to do that?”

“Yah, I can wait. Hell, I don’t even know where to start looking,” she grumbled, and he kissed her forehead.

“I do love nothing in the world so well as you,” he murmured.

“Je connais,” Loren whispered, sliding her arms around his neck and kissed him.

Sara was born in the wee hours of a November night in New York City. When her family moved to a small borough in northwestern New Jersey, she had little choice but to move as well. Self-sufficiency is a tough thing for a toddler.

The dichotomy of being the middle child of three, but the only girl, was difficult, as typically no one really pays attention to a middle child. Mostly, Sara spent her time creating fanciful stories in her head when she should have been focused on other things, an issue that continues to this day.

Most of these stories have never been shared, let alone completed. This all changed in the spring of 2015, when Sara was encouraged by a friend to expand upon a short story she had accidentally emailed to him. The result is ‘Wheeler’, a romantic, women’s fiction/sport novel, which combines the author’s romantic inclinations and her passion for cycling.

Sara currently resides in the suburbs of Philadelphia, PA, with her loving husband and their son. She is a paralegal for a boutique law firm in Chester County, Pa, an avid road cyclist and indoor cycling instructor at a national chain.