Threadwalkers by Joanna Volavka started out slow and I was unsure I even wanted to read it.  Everything seemed very…typically Y/A.  After reading the blurb I really wanted something special.  Despite claims at science fiction, I would label this book as fantasy.  It has a contemporary setting with no advanced tech.  The time travel happens because of inexplicable genetic predisposition.  However…keep reading.  The story explodes into insanity with the minute change of the wrong cat.  Miranda’s life continues to snowball out of control and the reader is taken along for the ride.

Characters keep popping up and, as a 16 year-old with no resources, Miranda is forced to trust or distrust them based on first impressions.  This leads to some very believable teenage reactions without being over-the-top dramatic.  I really liked Volavka’s adherence to how a lost and confused, though mature, teen would react–complete with the occasional temper tantrum.

The mishmash of ideas from most time travel movies is well-melded into a fascinating story that had me wishing I was taking notes on when and where the MC was.  The mixing caused the story to appear in a whole new way…and the lack of teen angst  beyond the freak-out of losing your BFF of 12 years was certainly appreciated.

I really hope this book becomes a series.   There is a lot left to speculation and a few unexplained characters, so i’m keeping my fingers crossed that we’ll see more from Miranda and the Threadwalkers in the future.  This is a solid 4-star read.  Pick up your copy from the links below!

After her father’s death in a plane crash, Miranda Woodward’s life begins to unravel. On her sixteenth birthday, Miranda receives a mysterious gift: a small wooden box containing a needle and spool of gossamer golden thread, left behind by her father, which begins a chain of events that soon leave her life in chaos. Her pet cat is replaced with another, her teachers don’t have her on their roll call at school, even her closest friends forget who she is. When her mother vanishes into thin air, Miranda becomes desperate for answers. She follows clues to a meet a man known only as the Tailor. With his help, she must find a way to fix her life before it’s too late. 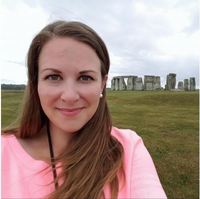 Joanna Volavka is the author of the young adult science fiction novel Threadwalkers. She currently lives in Chicago with her husband, two cats, and extensive book collection. A writer for Geek Girl Pen Pals, Joanna spends her time alternately between creative artistic pursuits and has a passion for conservation and wildlife while working on whatever story she’s got brewing in her overly active imagination. She still hasn’t decided what she’s going to be when she grows up, though she suspects it will probably be herself. Read more about Joanna and her adventures on her website http://www.joannavolavka.com