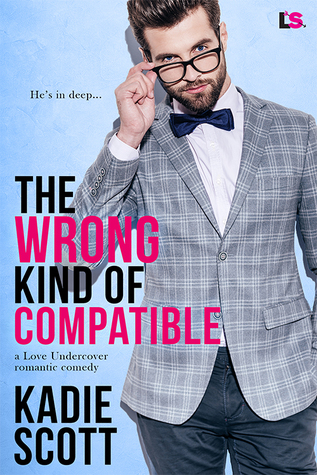 Data analyst Cassie Howard may be brilliant (and, okay, a little awkward), but she’s worked hard to get where she is. She definitely doesn’t need some sexy new analyst coming in and taking credit for her work. Or the inappropriate thoughts that keep popping out of her mouth she’d rather he not hear.

For undercover FBI agent Drew Kerrigan, computers have always made more sense than people, but he’d better develop some slick social skills in a hurry if he’s going to win over the too-tantalizing-for-his-sanity Cassie. Hacking their systems was easy. Now he’s just got to hack the one person in the company most likely to see through his ruse…

Grab your copy for only 99¢ for a limited time!

She flipped his hand palm up, and, with firm but gentle strokes, proceeded to massage the area. She pressed into the muscles, pulled on his fingers, and pinched the pressure point between his thumb and forefinger. Every stroke, every brush of her fingers against his skin turned into sheer sensual torture.

Done with his right hand, she placed it in his lap. Drew clamped his lips shut around a groan at how close she was to a part of his body that would love some similar attention. Instead, she picked up his left hand and gave it the same treatment.

His headache was, replaced by an entirely different kind of ache. “Not entirely.”

“Okay. Let me try one more thing.” She let go of his hand. “Close your eyes.”

He did as she asked, but immediately regretted it, because now his mind could supply all sorts of inappropriate images as she touched him. He should put a stop to this, but found he couldn’t. Didn’t want to.

She gently ran the pads of her fingers over his face, smoothing over his brows, his forehead, his cheekbones, his temples. Needing to see her, he slowly opened his eyes.

She smiled, eyes dark with an answering desire. “Helping?”

Help was a relative term. Drew didn’t answer, instead, he ran his gaze over every nuance of her face, eventually locking on to turbulent turquoise eyes, unable to pull his gaze away. He reached out and touched a strand of her silky, pale hair that had escaped her pencil restraints.

Cassie’s lips parted on a sweet little gasp that teased his ears. Unable to stop himself, Drew closed the small distance between them and brushed his lips over hers. Just the briefest kiss to relieve the need to touch her like this, to feel her soft lips against his.

“Drew?” she whispered against his lips.

Lord he could become obsessed with the husky timbre to her voice and the way she said his name. Lose himself in her. He pulled back just enough to see her expression. “Yeah?”

She swallowed. “Maybe we should finish this tomorrow?”

Why not tonight? The words trembled on the tip of his tongue until he realized she was talking about work.

For the latest news and exclusive excerpts, subscribe to Kadie’s monthly NEWSLETTER.