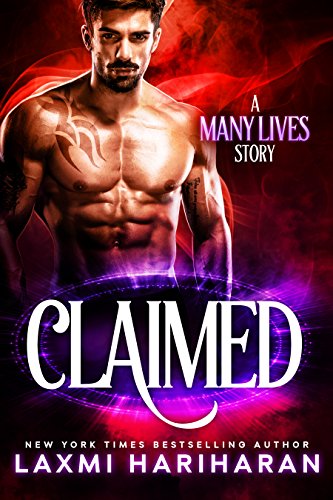 Laxmi Hariharan’s novel, Claimed, is book 4 in an on-going saga about immortals in a world that’s slowly being put back together by supernaturals after a cataclysmic event.  This is a standalone, but I feel like the understanding of the characters and situation would be richer if you read the previous books in the series.  There is even a prequel to this particular story available on Hariharan’s page for free.

However, I chose to read this as a standalone without reading the previous books first (rebelling against my completionist brain, here).  What I found was an enjoyable novel about love, redemption, and second chances.  It’s fairly fast-paced, but this is made more believable by a combination of fated soul mates and the fact that this isn’t the first time the characters have met.

The world-building is lacking, a bit.  The people sort of exist in a blank space populated with a few buildings of some sort.  And a garden.  There is no talk of distance or time when moving through this space.  Looking out the window just gives you a view of the city, not what the city looks like. With little description of anything, the world doesn’t feel real to me.  Given that this is a city that is foreign to me in my world, I’d really like to “see” more of it in this world.

It’s obvious that Hariharan put a lot of time into her characters, though.  Fully-formed characters leap off the page.  Their emotions and feelings are understandable and complex.  Tara kind of gives you whiplash with her mood changes, sometimes, but over-all she’s a strong character without being pridefully stupid or delving into whiny.  There is no woe-is-me in her.  Kris is a throwback, and it shows.  As an immortal, he’s older and some of the things that became ingrained into him over the ages are things that irritate, but Hariharan manages to integrate them into the relationship development between Tara and Kris without introducing angst.

The whole time, the relationship is a mix of pure frustration (for characters and reader) and heartbreaking emotions.  Kris’ history comes back again and again to punish Tara, but it’s a natural reaction and not something that feels forced or overbearing.  The nicknames they call each other in their heads are a perfect embodiment of their feelings for each other…the frustration and fear of hurt mixed with the draw and seduction.

Overall, Claimed lends itself nicely to the PNR genre and has some new and original ideas regarding supernaturals and the future of a world with them in it.  The ending is definitely refreshing and worth reading.

If you’d like to check out Claimed, you have two options.  There is an omnibus edition of the first part of the series along with a single.  Click on the image below to purchase!

I was provided with a copy of this book and I chose to review it.