This book made my To Be Read list as soon as I saw it.  Melanie Karsak has been on my radar for a while, so I was very excited to be able to help promote her new book!  (Also, I’m kind of a sucker for re-imagined fairy tales). 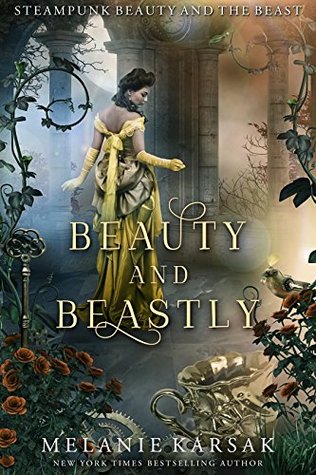 In this tale as old as time, Isabelle Hawking must tinker a solution to a heartbreaking mystery.

When Isabelle Hawking and her papa set out from London on a sea voyage, Isabelle is thrilled. Visiting foreign courts, learning from master tinkers, and studying mechanicals is her dream. And it doesn’t hurt that the trip also offers Isabelle an escape from her overbearing and unwanted suitor, Gerard LeBoeuf.

But Isabelle never arrives. Swept up in a tempest, her ship is lost.

Isabelle survives the storm only to be shipwrecked on a seemingly-deserted island. The magical place, dotted with standing stones, faerie mounds, and a crumbling castle, hints of an ancient past. Isabelle may be an unwilling guest, but her arrival marks a new beginning for the beastly residents of this forgotten land.

“Hello? Is anyone there?”

The sky overhead darkened, and in the distance, I heard the rumble of thunder.

I looked up at the sky. My head swam.

I needed to find shelter.

I turned to go back to the path, but when I did so, I didn’t see the path, nor the ring of mushrooms, nor anything else vaguely familiar.

Once more, the sky rumbled.

I felt the first of the raindrops on my head, but luckily, the thick leaves overhead sheltered me somewhat. As the storm rolled in, the forest grew dark.

I cast a glance around.

It didn’t matter which direction I went. Eventually I would find the shore once more.

Turning to head out, however, I spotted a bluish colored light in the distance. A house? A fire? A lantern? A…something.

Turning, I followed the bluish glow. I headed deeper into the forest, chasing after the light, but soon found its source. It was a mushroom. The glowing mushroom had been sitting on a rise. It had played a trick on my mind. Then I spotted another glowing fungus, then another, and another, all of which held an incandescent blue light. They grew in a straight line. Without a better recourse, and feeling half suspicious of the supernatural, I followed the glow of the blue mushrooms as the rain pattered overhead, the sky rumbling. I followed the blue lights deep into the ancient woods, aware that I was passing other sacred rings. I walked past a mound of earth, a barrow, the final resting place of some ancient person—and some said a passageway to the Otherworld—as I hurried deeper into the woods. Surely I would find the shoreline soon.

Then, on the horizon, I saw golden light. A fire? I squinted my eyes, trying to make out the shape through the trees, but my head ached miserably. Leaning heavily against my staff, I moved toward the golden colored light.

The forest thinned. The glowing mushrooms led me onward toward the glow of the yellow light in the distance. Praying to find someone—anyone—I followed along, well aware that my quick exertion had my stomach rolling. Black spots wriggled before my eyes. The line of mushrooms ended. To my shock, I’d blundered to the center of the island and found myself standing outside the gates of a castle.

I gazed up at the enormous structure. It towered over me, a black silhouette on the horizon. Light glowed through one of the windows in the upper floors. It was raining in earnest now. Not waiting a moment longer, I pushed the gate. It swung open with a creak.

I leaned my walking staff against a metal bench in the perfectly manicured garden, then grabbing my skirts, I ran for the castle door. As I rushed, lightning flashed. It created an odd illusion on the bushes and flowers around me. For a moment, they all seemed to glimmer like metal under the bright light.

My temples pounded. My stomach rolled. I raced through the heavy rain to the castle door.

Hoping whoever was at home would forgive me for letting myself in, I pushed open the castle door and crept inside.

The place was eerily silent.

Breathing deeply and quickly, I realized the moment I stopped that I was not well.

I cast a glance toward a roaring fireplace nearby. A chair was seated before the hearth, a glass of something dark sitting beside the seat. I heard a strange clicking sound.

“Hello?” I called again, but this time, my head began to spin. I put my hands on my hips, trying to catch my breath. I closed my eyes. Everything was twirling.

“I-I’m sorry I let myself in but…” I began then opened my eyes.

Standing before me was a massive automaton, its silver eyes staring coldly at me.

A nauseous feeling swept over me, and my head swam. Black spots danced before my eyes.

But the word was lost. 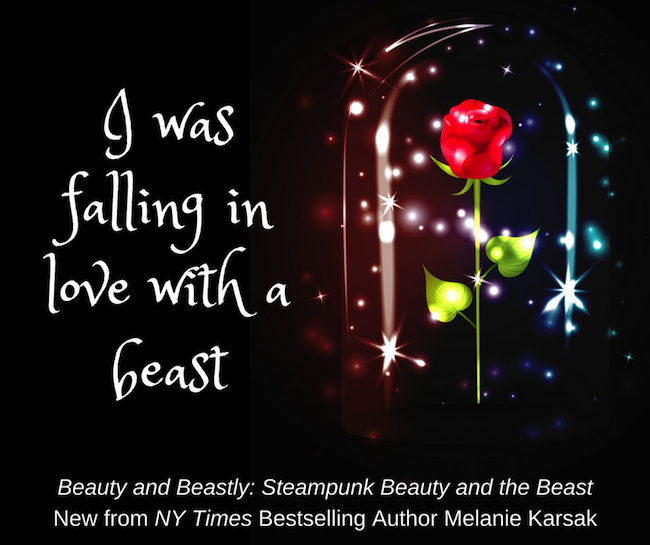 New York Times and USA Today bestselling author Melanie Karsak is the author of The Airship Racing Chronicles, The Harvesting Series, The Burnt Earth Series, The Celtic Blood Series and Steampunk Fairy Tales. A steampunk connoisseur, zombie whisperer, and heir to the iron throne, the author currently lives in Florida with her husband and two children. She is an Instructor of English at Eastern Florida State College.