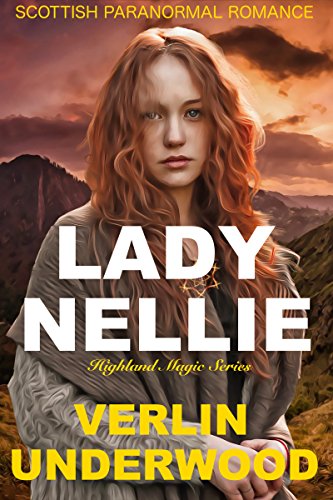 Verlin Underwood takes us back to medieval Scotland in her fantasy romance Lady Nellie.  The novel is a well-researched one, something I find is lacking in many independently published historical romances.  I was excited to see that nobody wore kilts!  I like kilts, but kilts weren’t worn in Scotland until the 16th century (so all our dreams of medieval highlanders wearing kilts are just dreams *sigh*).  Everything in the world-building seems to be pretty accurate, which makes it much more enjoyable to read.  There were few grammar mistakes, but inconsistent naming of characters and places took some getting used to.  Lady Nellie is referred to as both Lady Nellie and Lady Lyall interchangeably.  Her home is Castle Burrach or Burrach Castle.

Character development was hit and miss.  While parts were amazing, certain things didn’t make sense.  Lady Nellie is remarkably un-affected by spending 15 years with no-one but her mother and father for company.  She has no trouble conversing with strangers or being in crowds or being in front of people.  This is terribly unbelievable.  Her upbringing would have at least made her cautious, if not fearful.  The reaction of characters to certain events was anticlimactic and slightly unrealistic.  The reaction of Adam to learning secrets about his step-mother (whom he loved dearly) and his father’s death was so muted, they were nearly non-existent.  Then there was the plague.  Everybody continually harped on the plague.  It shows up again and again in the story-line, even requiring travel to a meeting.  And yet, nothing comes of it.  What happened to the people who left the Burrach Castle before Nellie?  There are a lot of plot-points that seemingly fade away, leaving the reader wondering why they were even included.

The fantasy aspect is more of a side-story until the end, which was a bit disappointing.  I was hoping for more evil Fae.  It seemed almost like the curse/fae part of the story was tacked on to explain a couple details and make the story fantasy.  This is not a full-blown fantasy romance, but rather an historical romance with some fantasy.  The story does focus on the relationship that builds between two supposed enemies, so throwing a lot of conflict into the mix would most likely disrupt that focus.  Unfortunately, there seems to be a bit of fate/insta-love aspect to their relationship.  This was frustrating because it was never addressed as such.  However, I enjoyed watching the two come together against the odds and people who would keep them apart.  Overall, not much actually happens in the story, and it seems to drag in places where Underwood got bogged down in details.

Give Lady Nellie a try by clicking on the image below.

I received an advance copy of this novel.