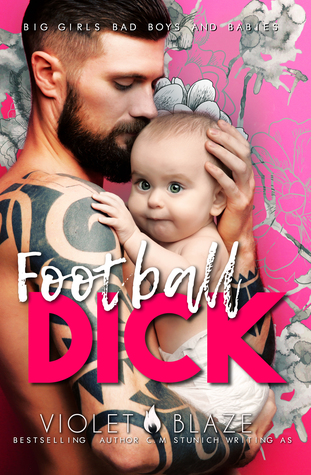 Wow.  Can I just say, this is probably the BEST sports romance I’ve read?!  I love me some sweaty guys chasing each other (or a ball, puck, etc) down the field, but generally the genre isn’t cerebral.  C. M. Stunich, writing as Violet Blaze, blows all those out of the water.  Her character development was so good, it made me uncomfortable.  I was uncomfortable because I could relate so well to Della as a person that I was feeling her emotions sometimes.  It was like a car wreck–it made me feel weird to watch, but I couldn’t look away.  I’m glad I pushed through that, though.  About 3/4 of the way through the book, I started getting jittery.  I KNEW something big was going to happen.  I KNEW Walt (Mr. Virgin) was completely batty and would snap, but I couldn’t tell where it was going to happen.  I couldn’t figure out if it would or if I was wrong and the story was going to just be “happy” (something I was going to be very disappointed with).  I was waiting the whole time for Rhoden to be attacked.  I was waiting for Della to be kidnapped.  I was waiting for her to fold to her father and marry Walt.  Most the book, I spent waiting to see what happened because I couldn’t predict it.  The characters were so unbelievably real for most of the story, which made their actions more difficult to predict.

I was a LITTLE off-put by the whole baby thing.  I felt like the reactions around that were just a little off.  I mean, I was living with my boyfriend and when I got a positive pregnancy test (unexpected), I did a lot more than cry.  Although, Della is a bit of a push-over and a sap, so maybe that’s all she could work herself up to.  What I am glad about in the whole situation is that 1- Della didn’t hide the baby from him, so much as stick true to character and chicken out about telling him and 2–He didn’t get pissed at her.  I absolutely HATE when the guy gets mad at the chick for being pregnant.  Like he wasn’t in the effing room with her.  Or he accuses her of lying about it being his.  So annoying.

Another thing this book impressed me with was the look into a little-explored and little-known form of verbal abuse known as gas lighting.  If you don’t know what gas lighting is, it’s where the woman (or man, as abuse happens to both) has their ideas, thoughts, and emotions belittled or downplayed as unimportant or, usually “irrational”, “hysterical”, or “crazy”.  It takes its name from a black and white film where the male lead would turn up and down the gas lights in the house and when the woman commented on it, he would pretend he didn’t know anything about it and that she was going crazy.  It eventually does drive her mad.  Walt’s behavior is classic of this.  When Della says she doesn’t want to marry him, he tells her that she’s the perfect political wife.  When she returns the keys and ring, he breaks into her house and leaves them on the counter.  Over and over, Walt subtly plays this game and you can see it every time Della questions if ending things with him is the right thing.

I like that it takes her time to come to that conclusion.  You often see MCs take very decisive actions around pivotal plot points.  But Stunich/Blaze actually gives a true-to-life representation of what a person would do with these decisions.  Her not marrying Walt affects not only her, but her whole family.  This is not something to be decided lightly.  I also like that she admits some of her self-esteem baggage comes from the things her stepmother told her growing up.  I like that she talks through the way she’s getting over that baggage, recognizing the things in her head as being not her own thoughts and feelings.

Overall, this book was slow to get into (I kind of hated Della in the beginning because she was so…blah), but she really grows into herself and her role and I found myself reading through dinner just to find out what happens in the end.

Pick it up and fall in love with Rhoden and Della by clicking the image below.