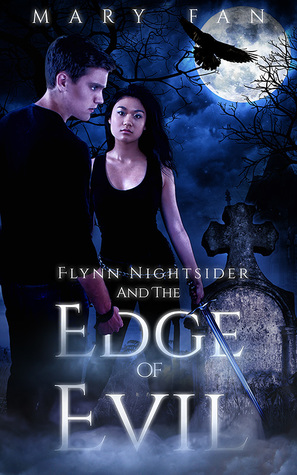 This book sounded like it would sweep me off my feet. I thought it had a chance to do just that during the prologue.

Mary Fan is definitely a talented writer. The world she’s conjured for this series is a fantastic melding of fantasy and fact. The writing and editing in this book are pretty close to flawless. There are no annoying homophones or errant apostrophes, and the story seems to be going at its own pace. But that pace just happens to be a la Tolkien or Martin… slow. There’s a lot of explaining and re- explaining in the beginning. It’s almost like Fan wanted to write an epic quest dystopian urban fantasy…and so she did. The story was well put together, but i quickly lost interest. I’m pretty sure this is because nothing seems to happen… even though there are things happening.

This is where my problem lies. There was no nail biting adrenaline rush when the spectre invades the school.  I almost forgot it happened… And the Lord of the Underworld is laughably a lot like a retro cartoon villain. I was seriously questioning his evilness the minute he showed up. All i could see was this winged demon twisting his moustache. I didn’t ever connect with Flynn in a way that made me care about him, either. While the characters aren’t necessarily flat, they don’t really stand out, either.

I’m pretty sure part of the issue is me, as young adult and fantasy are having an off month in my head, but I couldn’t finish this book. I just couldn’t get past the long inner monologues and bland characters.  However, I did have to give 3 stars because the writing is good.  I personally struggle with info dumps, which made this a very hard book for me to give into. I ultimately called it a day and put it down.

Flynn Nightsider and the Edge of Evil

Break the enchantments. Find the truth. Ignite the revolution.

A century ago, the Enchanters defeated the evil Lord of the Underworld, but not before he’d unleashed his monsters and ravaged the earth. The Enchanters built the Triumvirate out of what remained of the United States, demanding absolute obedience in exchange for protection from the lingering supernatural beasts.

Sixteen-year-old Flynn Nightsider, doomed to second-class life for being born without magic, knows the history as well as anyone. Fed up with the Triumvirate’s lies and secrecy, he longs for change. And when he stumbles across a clue that hints at something more – secrets in the dark, the undead, and buried histories – he takes matters into his own hands.

Before long, Flynn finds himself hunted not only by the government, but also by nightmarish monsters and a mysterious man with supernatural powers … all seeking him for reasons he cannot understand. Rescued by underground rebels, he’s soon swept up in their vision of a better world, guided by a girl as ferocious as the monsters she fights. But as the nation teeters on the brink of revolution, Flynn realizes three things.

The rebellion is not what it seems.

And the fate of the world now rests in his hands.

Mary Fan lives in New Jersey, where she is currently working in financial marketing. She has also resided in North Carolina, Hong Kong, and Beijing, China. She has been an avid reader for as long as she can remember and especially enjoys the infinite possibilities and out-of-this-world experiences of science fiction and fantasy.

Mary has a B.A. in Music, specializing in composition, from Princeton University and enjoys writing songs as much as writing stories. She also enjoys kickboxing, opera singing, and exploring new things–she’ll try almost anything once.