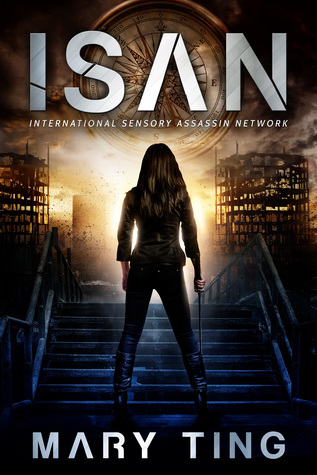 The premise of this book sounded…amazing.  I signed up as soon as I saw it.  It sort of is a mix between The Matrix and most other young adult dystopian novels.  There are a lot of tropes to work through.  Ava is a young woman who was in foster care before she was rescued by a secret group due to genetic markers…or not?  Mary Ting seems to swtich between over-explaining and not explaining enough.  There were points (usually in the beginning) where I wanted to yell “I GET IT ALREADY!”  Followed be long sections where I would end the chapter with 100 different questions.

The story flows at a nice pace, keeping the reader engaged.  Ting appears to be a fan of the “nudge, nudge, wink, wink” hint-dropping.  There’s a lot going on that the reader doesn’t know about, but Ting keeps you guessing with subtle and not-so-subtle reveals.  She keeps slowly revealing the unknowns, only giving them to the reader as Ava gets them, which helps with the pacing immensely.

The fact that the MC has only been in this program for a year is bothersome, as she is some kind of super ninja assassin.  She appears to have a higher proficiency in a lot of things than would normally be expected for this amount of training, as the serum doesn’t grant greater knowledge.  There are other little things that challenge the suspension of disbelief, but overall don’t interrupt the story.

For the most part, this was an enjoyable book, if a bit loaded with tropes.  The pacing was decent and the writing was good.  I wish there had been more character depth, as I didn’t really care about the characters and their issues.  However, I did keep reading because I needed to know what happened next.

THE WORLD HAS CHANGED.

SCIENTISTS WARNED IT WOULD HAPPEN.

Meteors devastated the Earth. World Governments developed plans to help surviving citizens. The United States disbanded and salvageable land was divided into our quadrants—North, South, East, and West—governed by The Remnant Council.

Struggling to survive, seventeen-year-old Ava ends up in juvenile detention, until she is selected for a new life—with a catch. She must be injected with an experimental serum. The results will be life changing. The serum will make her “better.” To receive the serum, Ava agrees to join a program controlled by ISAN, the International Sensory Assassin Network.

While on a mission, she is abducted by a rebel group led by Rhett and told that not only does she have a history with him, but her entire past is a lie perpetuated by ISAN to ensure her compliance. Unsure of who to trust, Ava must decide if her strangely familiar and handsome captor is her enemy or her savior—and time is running out.

International Bestselling Author Mary Ting/M. Clarke resides in Southern California with her husband and two children. She enjoys oil painting and making jewelry. Writing her first novel, Crossroads Saga, happened by chance. It was a way to grieve the death of her beloved grandmother, and inspired by a dream she once had as a young girl. When she started reading new adult novels, she fell in love with the genre. It was the reason she had to write one-Something Great. Why the pen name, M Clarke? She tours with Magic Johnson Foundation to promote literacy and her children’s chapter book-No Bullies Allowed.